Senator Lou Correa proposed a new online poker bill in California last Friday that was introduced on the last day permitted for this legislative session. 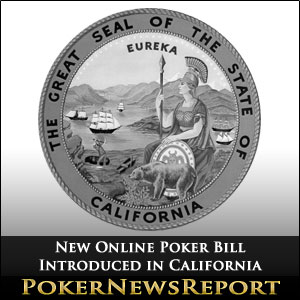 Senator Lou Correa proposed a new online poker bill in California last Friday that was introduced on the last day permitted for this legislative session.

SB 678, known as the Authorization and Regulation of Internet Poker and Consumer Protection Act of 2013, calls for intrastate poker only whose framework will be put in place by the California Gambling Control Commission.

This is a spot bill with some tribal support that will be heavily amended and will likely include card clubs, but not horse racing interests, California gaming attorney Harsh P. Parikh of Snell & Wilmer, LLP told PokerNewsReport.

Correa has long been a supporter of Internet poker in California and introduced a bill in July of 2011 that was amended numerous times but failed to garner enough support. SB 678 is a bare bones proposal that would legalize online poker within the borders of the state.

On the same day that Correa introduced his measure, Gov. Brian Sandoval of the neighboring state of Nevada signed a bill allowing the Silver State to form interstate compacts with other regulated states. As the most populated state in the country, California is seen by other states as crucial to a tremendously viable interstate online poker scheme. However, both SB 51 and SB 678 are proposed as intrastate legislation.

Previous attempts at online poker regulations in the Golden State have not been successful due to native tribes, card rooms and horse racing interests’ failure to find common ground on the issue. In June of 2012, Sen. Wright pulled SB 1463 from the agenda of a committee meeting because the votes to approve the measure were lacking. He and co-sponsor Sen. Darrell Steinberg attempted to amend the proposal to please the parties involved, but the legislative session ended in August with the bill still failing to gain support.