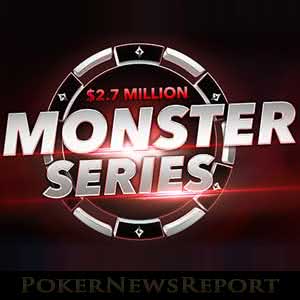 Party Poker has announced a $2.7 million guaranteed Monster Series from Sunday April 29th until Sunday May 6th. The series is considerably different from when it was first played last October, with the majority of the buy-ins being reduced to give more players more opportunities to win a monster prize.

Although not having quite as many events as before, the series promises to be equally as exiting. There is a good range of fast action, progressive knockout and 6-Max events, three tournaments exclusively reserved for the site´s female players, and a $300,000 guaranteed Main Event with a modest buy-in of $33.00 – plus a the likelihood of a supporting promotion due to be announced.

The Monster Schedule in More Detail

The guarantees for each event are between 1,000x and 10,000x the buy-ins (depending on the time of day and the day of the week), and the speed of the action accelerates through the day – the earlier events typically having a slower structure, while the later events consist of NL Hold´em tournaments with fast and turbo structures.

Overall, there will be 120 unique tournaments to play in (123 tournaments if you are a female player), and entering most of them will not break the bank. As mentioned above, there is a strong likelihood of overlays in a number of events, so the opportunity exists for players to win far more money than if they were playing in “regular” tournaments at Party Poker. It will certainly be worth reviewing the number of entries in each event as late registration draws to a close.

Supporting Promotions Still to be Announced

Prior to [geolink href=”https://www.pokernewsreport.com/party-poker-announces-october-monster-series-21909″]last October´s Monster Series[/geolink], Party Poker hosted a valuable leaderboard promotion offering more than $100,000 in cash prizes and tournament entry tickets. The promotion was centered on the site´s fast-forward cash games, and we expect a similar promotion to be announced in the near future. In the meantime, players can still take advantage of Party Poker´s ongoing promotions including:

New players can also take advantage of [geolink href=”https://www.pokernewsreport.com/partypoker”]Party Poker´s first deposit bonus[/geolink] and a range of exclusive “Get Started” missions in order to win free cash, tournament entry tickets and further bonuses. With the Monster Series just a few weeks away, and the likelihood of their being some potentially lucrative promotions announced in the near future, it would be wise to start your Party Poker experience today.