Michigan’s Gaming Control Board is considering changes that would limit the ability of local poker rooms to provide funding for local organizations. 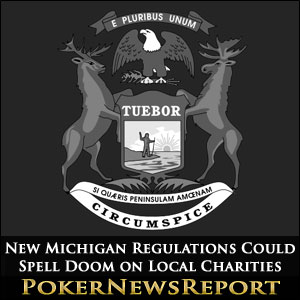 Michigan’s Gaming Control Board is considering changes that would limit the ability of local poker rooms to provide funding for local organizations.

For the past 8 years, local charities in Michigan have relied on proceeds collected from charitable gaming events. But due to an influx of criminal activities at these events, the Michigan Gaming Control Board has proposed harsh new regulations that would all but eliminate Michigan’s 40 charity poker venues.

Charity poker games, where the entirety of the rake is donated to a school, church or other not-for-profit organization, have raised millions of dollars for goodwill causes over the course of the past nine years.

Niles Community Schools is one of these organizations. Through charity poker tournaments alone, the school system has raised tens-of-thousands of dollars for essential programs and activities, including a program for special needs children that teach them how to adjust to the outside world. Schools also use the proceeds for much needed athletic equipment and uniforms.

The new rules would prohibit places of business from hosting charity poker games more than 30 days out of the year. Only three charities would be permitted per location, and each charity would have to undergo a background check to prove that it raised at least $2,000 over the past year. In addition, five volunteers from each charitable group must be present at the game, with each one possessing at least six months of experience working for the non-profit group. Charities would be limited to selling no more than $15,000 in chips per day.

There are some who believe that the new rules are designed with Detroit’s land-based casinos best interests in mind, reasoning that eliminating charity poker rooms would help increase the brick and mortar casinos profit margins. Michigan’s Gaming Control Executive Director Rick Kalm argues against this, stating that casinos make far more from slots and table games than they do from poker.

Kalm contends that illegal gambling activities, fraud and alcohol abuse are the main reasons why the commission is considering such harsh regulations. To date, charity poker rooms are not regulated by the governing board, and as such, proper security measures cannot always be taken.

However, despite the Control panel’s seemingly good intentions, severely restricting the ability of charity poker rooms to collect donations does not seem like a viable answer.

Volunteers for the organizations make money in a variety of ways, including making dinners, conducting raffles and working as dealers. Many of these volunteers would be hard pressed to raise the necessary funds for their respective organizations if events could only be held 30 times per year.

The new regulations have yet to be enforced. Some believe Gaming Control is waiting to see what happens with House Bill 4960 – a bill that would regulate charitable poker facilities on a national level – before enforcing the proposed changes.