The New Jersey State Assembly approved online gambling legislation 48-24, sending the bill to the Senate for a vote on Thursday. 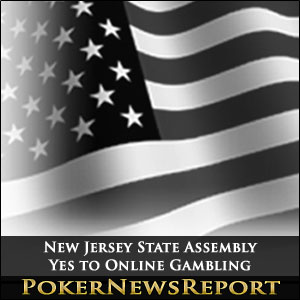 The New Jersey State Assembly approved online gambling legislation 48-24, sending the bill to the Senate for a vote on Thursday.

Should the Senate also find favor with A2578, the measure would then reach the in-box of Gov. Chris Christie, who vetoed a similar bill in early 2011 amid state constitutional concerns. It is unclear if Christie will sign the bill into law this time around.

However, much has changed in the almost two years since Christie used his rubber veto stamp on the previous online gambling bill. The U.S. Department of Justice found that the 1961 Wire Act pertained only to sports betting in late 2011, paving the way for individual states to enact Internet gambling legislation. Also, any hopes of regulations taking hold on the federal level recently were dashed when the Reid-Kyl bill lacked support and was not even introduced in the lame-duck session of Congress.

And with Nevada already having approved online poker legislation and preparing for sites to be in operation in early 2013, New Jersey would seemingly need to act soon to fulfill their desire of being the hub of the online gaming industry. The 2 to 1 margin of approval voted in favor by Garden State assemblymen reflects that.

We must position New Jersey’s gaming industry to thrive in the 21st Century, and that involves authorizing a legally sound Internet gaming law, Assemblyman John Burzichelli said in a press release. This is another key piece of our effort to boost New Jersey’s gaming industry by expanding and modernizing our wagering options. This will rejuvenate our tourist industry while increasing employment, capital investment and much needed urban development.

Another possible boost to the industry was last week’s announcement that PokerStars is in negotiations to acquire the Atlantic Club casino on the Jersey shore. In hopes of entering the lucrative U.S. online gambling marketplace, the industry’s top site is betting that a brick and mortar presence would facilitate that goal. The bill voted on by the state assembly included an amendment that removed a previous clause that would have banned PokerStars from providing online poker in the Garden State due to flouting the 2006 Unlawful Internet Gambling Enforcement Act (UIGEA).

In any event, it’s now up to the state Senate and Gov. Christie whether or not New Jersey will join Nevada and Delaware in legalizing forms of online gambling. Christie had said earlier this year that New Jersey should be in that [online gambling] business.