The New Jersey Senate yesterday passed Bill A2578 and online poker will once again be legal in the Garden State – subject to the signature of Gov. Chris Christie. 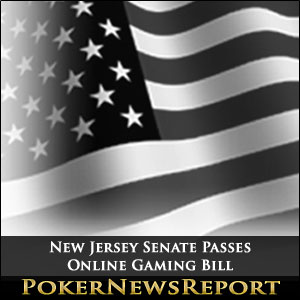 The New Jersey Senate yesterday passed Bill A2578 and online poker will once again be legal in the Garden State – subject to the signature of Gov. Chris Christie.

Following Tuesday´s approval of the proposed online gaming legislation by New Jersey´s State Assembly, the State Senate yesterday voted Bill A2578 into law by a margin of 33-3. All that prevents the return of online poker in New Jersey is the signature of Governor Chris Christie, but unfortunately this is not a foregone conclusion.

Governor Christie vetoed similar legislation in 2011 on the grounds that revenue from Internet gaming would become a horse-racing purse subsidy and that there would be Internet cafes popping up all over the State which would then turn into dens of iniquity. These two issues have been resolved in the new legislation.

Furthermore, since Christie´s refusal to sign the previous Internet gaming legislation, the US Department of Justice has revised its opinion that online poker is in violation of the Wire Act and Christie has even said himself earlier this year that I think New Jersey should be in that [online gaming] business. I think we should be an epicenter for that business.

The leading sponsor of Bill A2578, Senator Ray Lesniak, said that any online gaming sites which set-up under the new laws would only be allowed to serve residents of New Jersey, but he hoped that neighbouring States would adopt similar legislation and join with New Jersey to create larger online poker player pools.

Under the new gambling bill, all Internet servers providing online gaming have to be located within Atlantic City and, should Christie rubber-stamp the legislation on this occasion, it will enable PokerStars to re-enter the USA poker market if their proposed purchase of the Atlantic Club Casino is completed.

The Governor has 45 days from when the bill lands on his desk to either authorize it, veto it or do nothing, and allow the legislation to go through by default when the time elapses. If Christie does allow the bill to proceed, Senator Lesniak has said that he expects the first online poker sites to be functional in New Jersey within six months.