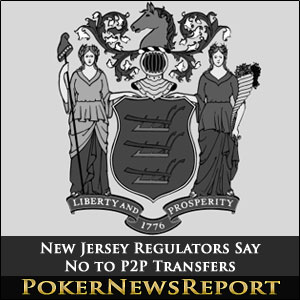 The request to allow player-to-player transfers was made by the Rational Group – the owners of PokerStars – who have applied for a licence to provide an online poker product in conjunction with the Resorts Casino when online poker in New Jersey gets the green light on November 26th.

Plenty of players on the PokerStars.com site use player-to-player transfers for staking other players, settling prop bets or simply sending money to friends, but the practise was banned on their “ring-fenced” sites in Spain, Italy and France, and has also not been allowed on the poker sites operating in Nevada.

The reason given by the Division of Gaming Enforcement was that being able to transfer funds between players would facilitate money laundering, collusion and fraud, despite evidence given to the contrary that an electric fingerprint could easily detect where the money had come from and who it was going to.

Meanwhile, the Borgata Hotel Casino and Spa were celebrating as they were given the first of the New Jersey online gaming permits that will be issued over the forthcoming weeks. The permit will allow the Borgata poker product being prepared in partnership with Bwin.Party to go into “soft play” on November 21st ahead of the real money poker launch.

In a press release issued after the permit had been awarded, Borgata President – Tom Balance -commented

It’s always nice to be first in the queue. Borgata and Bwin.Party are aggressively pursuing our objective of being among the first to launch online gaming in the state.

We believe online gaming is an exciting growth opportunity for New Jersey’s gaming industry, one that will generate significant benefits for the state as New Jersey assumes a leadership role in this emerging form of gaming entertainment.

Feedback Indicates that Borgata Will Not Lead for Long

Feedback to the news that the Borgata received the first gaming permit was fairly muted in the online poker forums. The few contributors that bothered to comment on the news on Two+Two said that Party Poker had better have their fast-fold poker game “Fast Forward” ready to launch or they would lose all their business to the (superior) PokerStars´ “Zoom Poker”.

The sentiments were pretty much the same on Pocket Fives´ Forum, with most of the discussion revolving around how many players would abandon the Borgata as a live poker venue should PokerStars plans to build a $10 million poker room in the Resorts Casino see the light of day. The news did not make it onto the (primarily UK-based) Blonde Poker forum at all!