Online gambling revenue in New Jersey totaled $9.5 million in January, a 28% increase over the numbers posted in December, 2013. 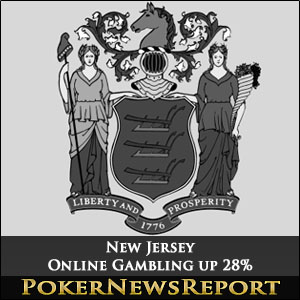 Online gambling revenue in New Jersey totaled $9.5 million in January, a 28% increase over the numbers posted in December, 2013.

While Internet gambling is on the rise, overall revenue for Atlantic’s City’s 11 casinos experienced a decrease of 4.6% from revenue totals posted one year ago in January, 2013. Last month, $195.7 million was won by casinos, compared to $205.2 million in January last year, the New Jersey Division of Gaming Enforcement (DGE) reported.

Part of the reason for the decline is that this time last year, the New Jersey casino industry was tallying receipts from a dozen Atlantic City casinos. The Atlantic Club Casino Hotel closed on January 13 after being acquired by Caesars and Tropicana following bankruptcy proceedings.

Almost 200,000 online gaming accounts have been opened since the Garden State’s Internet gambling soft launch commenced on Nov. 21. That total was as of Jan. 31, 2014. Almost two weeks have passed since that time and the number is likely beyond 200k currently.

Online poker revenue in January for all six casinos that are utilizing Internet gaming licenses fell just short of $3.5 million. That accounted for 36% of all Internet gambling revenue that includes casino games such as roulette and blackjack.

The Borgata Casino Hotel & Spa took in $3.9 million in Internet wagers last month, accounting for roughly 41% of the online market. MGM and Boyd Gaming own the Borgata and have partnered with bwin.party to offer online wagering. Caesars, which operates the popular WSOP brand, grabbed slightly over $3 million in online gaming revenue.

While the increase in Internet gambling revenue is encouraging, it may be difficult to continue posting gains near 30% in the future. Marketing strategies undertaken by the casinos are aimed at attracting new players to give online wagering a try. However, there are indications, at least in regards to online poker, that growth may have hit a plateau and a leveling off period is likely to follow.