Residents of the East Coast are being bombarded with online gambling advertisements compliments of the Atlantic City casinos. 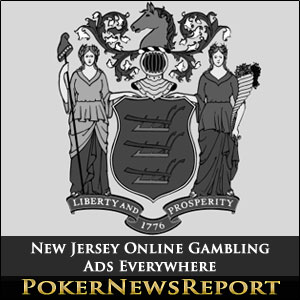 Residents of the East Coast are being bombarded with online gambling advertisements compliments of the Atlantic City casinos.

TV, radio, shopping malls, highway billboards, ferry terminals and Internet websites are the mediums being used in New Jersey to let gamblers know that online gambling is legal in the Garden State. The ads urge gamblers to give Internet wagering a try if they haven’t done so already, nj.com reported.

While those who do gamble online must be within state borders, the ads are also targeting out-of-staters who may happen to find themselves in New Jersey. That includes residents of Pennsylvania and New York, many of whom may remember making the trek to Atlantic City casinos before land-based gaming establishments began popping up in their home states.

New Jersey’s online gambling scheme will reach its one-month anniversary the day after Christmas. The ad campaign to attract new players to the gaming websites will extend well into the new year, as Caesars Entertainment will roll out a marketing blitz of its own come January.

Caesars operates Internet gambling websites through its namesake casino and Bally’s, making up two of the seven Atlantic City casinos that have been licensed by state gaming regulators to do so. There are currently 12 casinos in New Jersey, but that total will shrink to 11 in three weeks.

The sale of the Atlantic Club to Caesars and Tropicana for $23.4 million was approved by a federal judge on Monday and the bankrupt casino will close on Jan. 13, 2014. It will not reopen as a casino. Tropicana gets the casino’s slots and table games for $8.4 million, while the casino and hotel property is added to the real estate holdings of Caesars for $15 million.

The massive ad campaign touting New Jersey online gambling seems to be working, as almost 110,000 player accounts have been opened at the regulated gaming websites. State officials have reported a steady increase of new accounts created since soft launch testing commenced on Nov. 21 and was followed by a hard launch five days later.

Many of those accounts are presumed to belong to the same players, as nothing prevents account holders from creating accounts at multiple sites. But regulators are highly encouraged by the turnout thus far and the latest marketing campaign is likely to attract thousands of more players to sign up and give Internet gambling a go.