New Jersey is wasting no time in moving forward with its online gambling regime, preparing to have rules drafted perhaps as early as Thursday. 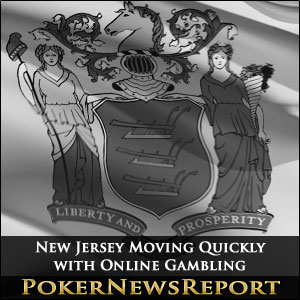 New Jersey is wasting no time in moving forward with its online gambling regime, preparing to have rules drafted perhaps as early as Thursday.

While some industry insiders such as Caesars Entertainment Chief Executive Gary Loveman have gone on record as saying that it may take 1 and 1/2 to two years to have online gaming sites up and running, other experts believe that the end of 2013 is a more accurate timetable.

One thing is certain, however. The New Jersey Division of Gaming Enforcement was not sitting idle waiting for Christie to sign the bill. Regulators have been examining and studying online gambling regulations in force in other parts of the world for quite some time. Roughly 85 jurisdictions have already been analyzed, the Star-Ledger reported.

Gov. Chris Christie took his time prior to issuing a conditional veto on Feb. 7, waiting the full 45 days to recommend changes to the measure. But once the New Jersey legislature approved his conditions, the governor immediately signed the bill into law. New Jersey is now on a fast-track to become the hub of Internet gaming, with a goal of being operational in nine months.

New Jersey’s swiftness is forcing Nevada to speed things up in their quest to be first with online poker. The Silver State has been moving ever so slowly and methodically ever since legalizing Internet poker in 2011. Gaming officials have been earnest in making sure software testing and all other aspects of their online poker scheme are in place. So much so that some companies received six month extensions for testing.

But lawmakers there moved quickly at the urging of Gov. Brian Sandoval in getting an interstate compact bill approved. Sandoval wants Nevada to be first in what he called the “new frontier” of online gambling. Delaware hopes to have sites up and running by Sept. 30. And New Jersey is now working diligently to compete with those two states. The three states could eventually form partnerships in order to increase online poker player pools. But as of now, the race is on to become online gaming’s epicenter.