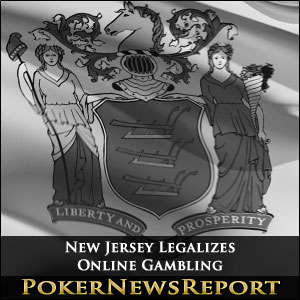 Christie had conditionally vetoed the measure less than three weeks ago. The New Jersey state legislature convened yesterday to vote on the changes proposed by Christie and to listen to the governor address the state’s budgetary concerns. Prior to Christie stepping up to the microphone, the assembly voted 68-5-1 in favor of approving the legislation, while the senate vote was nearly unanimous at 35-1.

Only moments after receiving state legislature approval, Christie signed the bill that will allow Atlantic City casinos to offer online poker and casino games within New Jersey. However, the bill does allow for partnership agreements with other states and possibly foreign countries sometime in the future.

The changes proposed by Christie went untouched by lawmakers. Those changes included a tax increase on online gaming operators from 10% to 15%, a 10-year time limit on the statute that may be extended following analyzation, and setting aside $250,000 per year to fund addictive gambling programs, up from the initial amount of $150,000.

After signing the bill, Christie addressed the legislature and proposed a budget of $33 billion for 2014, of which $180 million is expected to come from online gambling. That figure seems quite high and may require partnerships with other states to be reached.

It took more than two years for the Garden State to regulate online gambling. Sen. Ray Lesniak’s first proposal was introduced in January, 2010. The legislature approved the measure one year later, only to run into a Christie veto after the governor took the entire 45 days at his disposal to mull it over. Lesniak reintroduced the bill last year in accordance with Christie’s concerns. The legislature voted for approval in December and Christie again waited 45 days to use his veto powers, this time with proposed amendments.

New Jersey now joins Nevada and Delaware as the only states that have enacted online gambling legislation, with Nevada’s restricted to poker only. The other two states are expected to offer a full menu of online casino games. Lesniak is hopeful to have sites up and running this fall, but a number of industry veterans believe sometime next year is a more accurate projection. Nevada enacted legislation more than one year ago and is still in the process of scrutinizing applications and testing software.

In any event, Christie’s signing of the bill is great news! And with Nevada passing legislation last week that allows for interstate online poker, the future is looking brighter for U.S. Internet poker players.