The choicest real estate in the U.S. these days may be located on the Eastern seaboard as New Jersey readies itself for online gambling. 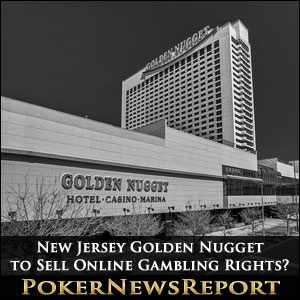 The choicest real estate in the U.S. these days may be located on the Eastern seaboard as New Jersey readies itself for online gambling.

Atlantic City casinos that have been hemorrhaging money for a number of years have no choice but to listen to offers from potential buyers in order to perhaps recoup some of the losses experienced in recent years. Rumors have circulated indicating that the Golden Nugget Atlantic City is one such casino that has been pondering at least one proposal.

The New Jersey Division Of Gaming Enforcement recently reported that the Golden Nugget has experienced operating losses of over $11 million last year and more than $8 million so far this year. That’s on top of roughly $145 million in renovations taken on in 2012 and another $38 million or so to buy the former Trump Marina Hotel Casino in 2011. The Golden Nugget has been a costly investment for owner Tilman Fertitta. It’s easy to see why the billionaire owner would be inclined to return the calls of potential buyers.

Prior to last year’s renovation project, Fertitta did remark that he intended to be in Atlantic City for decades and had no intention of flipping his renamed gambling establishment. However, with online gambling set to debut in New Jersey in less than three months, there are options available to Fertiitta and the state’s other 11 casino owners.

The most glaring of those options is to sell off the online gambling rights. The investment bank known as Houlihan Lokey has approached the Golden Nugget to purchase the casino or, in the alternative, the rights to own the casino’s Internet gambling platform, the Press of Atlantic City reported.

Its difficult to put an exact value on how much a New Jersey online gambling license may be worth. There are only a dozen such licenses currently available and the opportunities of interstate compacts in the future may allow for considerable profits in the long term. One analyst pegged the value of a gaming license at anywhere from $50 million to $100 million.

That certainly would go a long way in defraying the more than $200 million that Fertitta has shelled out since 2011. However, if he is true to his word and intends to remain in New Jersey for years to come, he may want to continue with the current plan of offering his own brand of online gambling with Bally Technologies supplying the software.

The estimates of Atlantic City’s take in online gambling revenue vary widely, anywhere from $200 million to more than $1 billion every year. Even if the figures eventually come in toward the bottom of those estimates, any one of the 12 casinos stands to make almost $17 million per year.

It must be hard to sit idly by while your brick and mortar casino continues to dump millions of dollars in operating expenses. However, with online gambling just around the corner and the resulting profits expected to be lucrative, holding onto the ball for the time being may be the better option than selling off the Internet gambling rights.