New Jersey’s online gambling launch of November 23 may be in jeopardy because applications submitted by some of the state’s casinos lack necessary information. 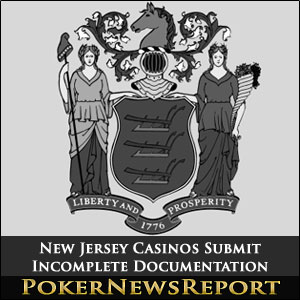 New Jersey’s online gambling launch of November 23 may be in jeopardy because applications submitted by some of the state’s casinos lack necessary information.

The Division of Gaming Enforcement (DGE) sent an email to all Atlantic City brick and mortars detailing the information that is missing and requesting compliance by Friday, September 20. That gives the DGE slightly more than two months to complete its investigations of all partnerships that include geolocation and payment processing functions.

That hardly seems enough time to turn on the virtual switch just before Thanksgiving. New Jersey gaming officials reportedly have been preparing for a launch even before Governor Chris Christie signed online gambling legislation in February. But the aggressive target date of Nov. 23 may be hard to reach considering the length of time it is taking Nevada gaming regulators to accomplish much of the same tasks.

The casinos lacking in regulatory filing information were not named. It is believed that not all 12 Atlantic City gaming establishments are guilty of submitting incomplete data, but enough are at fault that the DGE found it necessary to send the missive to each and every one, NorthJersey.com reported.

Although the information lacking in the submitted documentation appears to be somewhat extensive, that which needs to be thoroughly reviewed by gaming officials includes contracts with service providers and third-party vendors. All but two of the dozen casinos named their online gaming partners, the Revel and Atlantic Club being the only holdouts.

As readers will recall, PokerStars ran into problems with the DGE when their initial submission for a casino license was sent back as incomplete. That delay caused parent company Rational Group to miss a contractual deadline in its attempt to purchase the Atlantic Club. The casino then backed out of the deal and is again reportedly accepting offers in hopes of upping the ante in the purchase price.

It took PokerStars several months to comply with the requirements of DGE officials. Whether the reason behind the delay was a lackadaisical approach on behalf of PokerStars to meet the DGE demands or if the information required by state regulators is much too detailed and complex is unknown.

However, if it turns out to be the latter, the late November launch date may not get off the ground in a timely fashion. Let’s hope the casinos who failed to properly supply the needed information can submit complete applications by the Friday deadline.