With its soft launch less than a week away, New Jersey officials made moves that would permit the state to become the hub of Internet gambling. 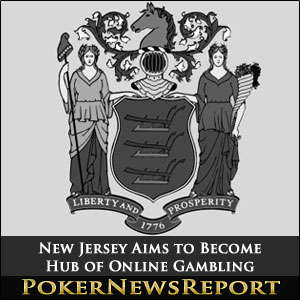 With its soft launch less than a week away, New Jersey officials made moves that would permit the state to become the hub of Internet gambling.

A bill was approved by the Senate State Government, Wagering, Tourism and Historic Preservation Committee that would permit the equipment used to operate online gambling sites to be located outside of casinos. The servers and such would still need to be stored within Atlantic City.

Despite the monstrosity of some casinos, many don’t have the available space to house the necessary online gambling equipment. New Jersey authorities envision a plan whereby the state would host a centralized Internet gambling system that would spread online wagering to other regions in the U.S. via interstate compact agreements.

The bill is now on its way to the full Senate, while the fate of a similar bill awaits a vote by an Assembly committee, the Press of Atlantic City reported. Considering New Jersey’s size and the fact that it is poised to be among the first states to rollout online gambling that includes a full menu of casino games, becoming the nation’s hub of Internet gambling seems quite likely.

PokerStars In or Out?

While lawmakers wrestle with those legal issues, all eyes remain on the New Jersey Division of Gaming Enforcement. Regulators announced last week that new licensees in the state’s online gambling regime would be announced today.

Industry observers are watching intently to see if PokerStars will be among today’s approvals. A recent poll by eGR found that 63% of respondents believe that the world’s top poker site will be denied entry to the U.S. market via New Jersey.

Only 11% think that PokerStars will be rubber-stamped before November ends to team up with the Resorts Casino Hotel in providing online gambling services to those located within the Garden State. The other 26% are of the mind that license approval will happen at some point, but not today.