This time around, high-stakes specialists Doug “WCGRider” Polk and Ben “Sauce1234” Sulsky are engaging in battle at Full Tilt Poker. 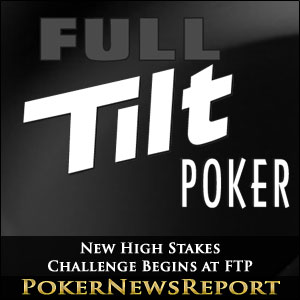 This time around, high-stakes specialists Doug “WCGRider” Polk and Ben “Sauce1234” Sulsky are engaging in battle.

Beginning on Sunday, two of online poker’s shining young stars began a new high-stakes, heads-up challenge on Full Tilt Poker. The arrangements are as follows: The two players, Douglas Polk and Ben Sulsky will play a total of 15,000 hands over an extended period of time. They will play $100/$200 NLHE exclusively. If either player builds a stack of over 250 big blinds ($50,000) during any single session, the session will come to a halt. At the end of the 15,000 hands, whoever is ahead must be paid an additional $100,000 from the loser. This must be paid in addition to whatever winnings are earned throughout the course of the match.

While this newest challenge might seem like small potatoes compared to the challenge Tom Dwan issued, it still provides railbirds an exciting opportunity to watch two of online poker’s youngest stars engage in high-level combat.

The dynamic duo tangled for the first time on Sunday, with Polk jumping out to a huge early lead. In the largest pot of the night, Polk would call Sulsky’s pre-flop four bet with Q♦Q♣. The flop came Q♥4♦2♦ and Polk would check-call a continuation bet. The turn produced a brick, and once again, Polk would only check call. By the river, Polk still had the nuts. Shockingly, he checked a third time. Convinced he had the best hand, Sulsky shoved, and Polk snapped. When the cards were flipped over, Sulsky revealed K♥K♣.

On another occasion Polk flopped turned two overs and a flush draw to Sulsky’s top set of tens. All the money went in on the turn, with Suksky a huge favorite. The two agreed to run the river twice. Unbelievably, both rivers completed Polk’s flush, with neither pairing the board. According to our calculations, the odds of Polk winning both runs were approximately 40-to-1. Suffice to say, the old adage I’d rather be lucky than good, definitely applies to this situation.

But Polk hasn’t always been lucky. Earlier this year, he was the victim of a malicious hacker. While away on a business trip to Japan he lost approximately $35,000 to an unknown player on PokerStars. It was revealed that the hacker could see Polk’s hole cards. Polk’s loses have since been returned to him.

The two young superstars will redeem their match this Wednesday at noon EST. The session is expected to last for three hours. To date, Polk is up approximately $227,000 on Sulsky.