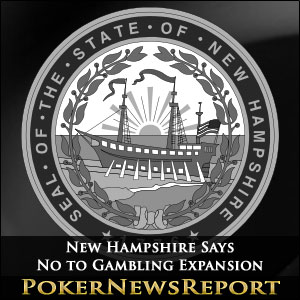 The New Hampshire House had a very heated two hour debate on Wednesday dealing the possibility of expanding gambling in the area. In the end they voted against the proposal to build a casino in New Hampshire.

The New Hampshire House voted 199-164 to stop a state senate bill in its tracks that was supported by Democratic Governor Maggie Hassan. The proposal would have seen the state introduce 5,000 video slot machines and 150 table games at a single gambling facility in the state. It would also allow New Hampshire to compete with Massachusetts for gambling dollars and help the state generate money for infrastructure, higher education and more.

However, while supporters of the idea said that the money would assist the state immensely, considering that it has no GST or personal income tax to fund these projects, opponents expressed their concerns about the increase in the number of gambling addicts.

The final vote saw 107 Republicans and 92 Democrats vote against the bill despite Hassan managing to get the majority of the Democrats over to her side.

Governor Hassan, who was so sure that she’d manage to push the bill that she even included $80 million from casino licensing fees into her budget, criticized the House for not giving the proposal due attention before voting against it.

Hassan issued a statement saying that while the issue of expanded gambling has been an on-going and difficult debate in New Hampshire for years, the fact of the matter remains that gambling funds are the only answer to the growing social costs that the state faces. She pointed out that the social costs that many are worried about are already here and, with Massachusetts moving forward in its gambling industry, New Hampshire can no longer pretend that expanding gambling is not coming to local communities. It is, she said simply.

Hassan said that it was disappointing that the House of Representatives broke away from the tradition of open and thorough debate and admitted that the path would now be more difficult to raise the funds necessary for growing social state costs.