Full Tilt Poker has issued a general statement in which they berate the US Department of Justice for referring to the company as “a global Ponzi scheme”. 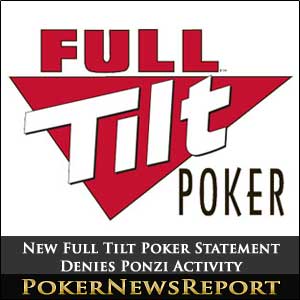 Full Tilt Poker has issued a general statement in which they berate the US Department of Justice (DoJ) for referring to the company as “a global Ponzi scheme”.

Rather than use an opportunity to keep their ex-players advised of the current state of negotiations with “a(nother) secret investor” which may lead to a refund of their bankrolls, Full Tilt Poker chose to argue dictionary terminology.

“Full Tilt Poker is Not a Ponzi Scheme”

The full content of the statement is as follows:-

“On September 19, 2011, the Department of Justice issued a release stating that Full Tilt Poker was “A Global Ponzi Scheme.”  While the government has taken issue with the underlying activities of FTP, under any reasonable interpretation, there is no way to characterize the operation of Full Tilt Poker’s virtual online card room as a global Ponzi scheme.

A “Ponzi” scheme is an investment fraud that involves the payment of purported returns to existing investors from funds contributed by new investors. Ponzi schemes do not involve any legitimate investment, but rather use the new investor funds to pay “dividends” to the initial investors.

Despite recent events, FTP remains committed to identifying a suitable investor and paying back its players in full.”

Industry observers have been quick to laugh off this latest “news” as a complete waste of time – commenting that it took the directors of Full Tilt Poker a week to look up what a “Ponzi Scheme” actually was! There are also inaccuracies within the statement – It was US Attorney for the Southern District of New York, Preet Bharara, and not the Department of Justice who were responsible for the quote “Full Tilt was not a legitimate poker company, but a global Ponzi scheme”, and the company did not deny the accuracy of first half of that quote in their statement!

It also looks as if Full Tilt Poker is lining up the Alderney Gaming Control Commission (AGCC) to be the fall guy if the proposed takeover by “a(nother) secret investor” fails to complete. The AGCC has maintained its silence (despite promises to the contrary) about last week´s licence hearing with Full Tilt Poker, when many people felt that they had no option but to permanently revoke Full Tilt Poker´s operating licence. It is feasible that the AGCC have given Full Tilt Poker a final extension (of the suspension) to try to conclude the deal, but if the AGCC´s patience runs out before Full Tilt Poker finds a buyer, the onoffline [geolink href=”https://www.pokernewsreport.com/online-poker-rooms”]poker site[/geolink] can then accuse the AGCC of costing them the deal that could have saved the company.

Rumours emerged during the night that a deal to sell Full Tilt Poker had been concluded with French investors following a tweet by 2+2 Pokercast´s Adam Schwartz. The 2+2 poker site was quick to quash the rumour by stating that it could not possibly be true, as Jeff Ifrah (an attorney acting on behalf of Full Tilt Poker) had been contacted and stated that the investors were not meeting representatives of the DoJ until Friday of this week at the earliest and probably not until Monday of next week.

According to Mr Ifrah, the investors are currently in Alderney discussing the licence situation with the AGCC. He stated “The investors are totally committed to doing this- we’ve met with them and seen the funds. Their primary concern right now is the AGCC’s decision on Full Tilt’s license. The investor’s position is that if Alderney revokes the license, they won’t go through with the deal because it makes things too difficult.”

Still Many “Ifs” and “Buts”

The conclusion that can be drawn from the latest media merry-go-round is that nobody is any closer to a deal than they were last week when the AGCC held their public private meeting with Full Tilt Poker. If it is true that Full Tilt Poker were given until the end of the month to conclude the “deal”, that will not be happening if the “investors” are not meeting with the DoJ until 3rd October. And what if the AGCC says “You can have your license” and then the DoJ says they still want their $1 billion in damages from the original April 15 indictment? Is Full Tilt Poker really worth that much?