Congress has recessed for the Memorial Day holiday on Monday, May 27, which has slightly delayed the introduction of a new online poker bill. 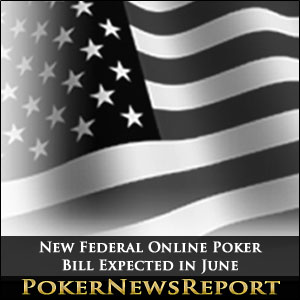 Congress has recessed for the Memorial Day holiday on Monday, May 27, which has slightly delayed the introduction of a new online poker bill.

A new proposal is expected to be introduced in early June, according to Poker Players Alliance Executive Director John Pappas. Encouraged that legislators are taking the time to draft the measure in a passable form as opposed to rushing the matter, Pappas stated on 2 + 2 that a sincere effort is being made to gather support for what he called the Internet casino and poker bill.

Reading between the lines, one can surmise that Pappas is alluding to the failed Reid-Kyl bill in 2012 as a bill whose language was not passable and would not find acceptance among lawmakers. That bill, sponsored by Senators Harry Reid and Jon Kyl, was never introduced in Congress following the 2012 November elections. It was often criticized for favoring Reid’s home state of Nevada and was strongly opposed by the National Governors Association and a number of state lotteries, among others.

With legislation slowly progressing on the state level, federal lawmakers continue to contemplate advancing a workable online poker and gambling bill that would allow all states to join in upon approval of each state legislature. States would have the option of opting in or out to the federal framework.

Thus far, Nevada, Delaware and New Jersey have enacted various forms of online gambling legislation. Other states such as California, Pennsylvania and Illinois are considering Internet gaming statutes of their own. Utah is the only state that has already passed legislation opting out of any federal online gambling scheme that may be passed at a future date.

Another bill on the federal level proposed by Rep. Joe Barton is expected to be introduced later this summer. Pappas indicated that he recently met with the Texas lawmaker’s staff and was told that their proposal was also a work in progress. Barton has sponsored bills in previous years that failed to garner enough support. But that has not deterred the Republican lawmaker from trying again.

Legalized online poker began in the U.S. on April 30 when Ultimate Poker launched the first product. Met with much initial excitement, some of the luster faded when a number of Nevada residents encountered log on problems. Most of those glitches have since been corrected.

While legislative progress on the state level has certainly been encouraging, players are still clamoring for legislation on the federal level. Such a regime would eliminate many problems that a state-by-state format will likely encounter. Also, the whole country would be able to participate much more quickly if only an opt-in to the federal plan is all that would be required. Waiting for each state to propose and pass their own legislation will take a considerable length of time.