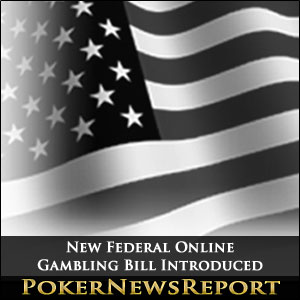 This is the first such online gambling proposal on the federal level in 2013 and is also the first before the new Congress following last year’s November elections. The much-ballyhooed Reid-Kyl poker-only proposal discussed during the Congressional lame duck session toward the end of 2012 was never actually introduced.

King’s proposal is titled the Internet Gambling Regulation, Enforcement, and Consumer Protection Act of 2013. Weighing in at 134 pages, the bill likely faces an uphill battle despite making a point to include all gaming interests on equal footing. The measure aims to regulate online poker and casino games, leaving out only sports betting.

Regulation would be overseen by a newly-created Office of Internet Gambling Oversight. If passed, the bill would automatically include all 50 states and would allow those states that wish to exclude themselves a 120-day period to opt out. In the case of states that have already enacted online gambling legislation such as Nevada, New Jersey and Delaware, their existing frameworks would be allowed to be grandfathered in under the federal plan.

States or tribes that choose to opt out are not required to prohibit online gambling altogether. They are free to operate their own Internet gaming scheme within state borders. Though nothing is yet certain, California may be one of the states that chooses to go this route. With a population of more than 38 million, the Golden State is practically a country unto itself and would need not partner with other states to create a viable online poker platform.

One drawback to the King bill is that it restricts online gambling to within U.S. borders. This is not a good idea as far as online poker is concerned, as expanding player pools internationally is seen as highly beneficial to any Internet poker regime. Just this week, Nevada lawmakers approved a bill that allows international compact agreements.

King reportedly consulted with the Poker Players Alliance in drafting his proposal. It is not known why the PPA would not push for a law designed to possibly include foreign jurisdictions to increase liquidity. Perhaps once online poker is established within the U.S., the law can be amended to allow agreements with other countries.

Other details of the measure state that licenses be valid for a five-year period, player account balances must be segregated from accounts used to operate the sites, and heavy fines shall be levied against unauthorized operators in an effort safeguard consumers. Rates of taxation will apparently be covered more thoroughly in another bill.

Prohibiting minors from gambling online and enforcing fair play are also key points in King’s proposal. As is the allotment of federal funding to combat those who fall under the spell of gambling addiction. These are often cited by anti-gambling advocates as reasons why new online gaming laws should not be enacted, so its crucial that any regulations include such safeguards.

The King bill differs from recent proposals at the federal level, as it seeks to regulate online casino games in addition to poker. Whether that will allow the measure to fare better than recent poker-only attempts remains to be seen. Republican support is imperative for the bill to advance. Let’s hope that King and other GOP lawmakers such as Sen. Dean Heller (R-NV) are able to convince their colleagues that a majority of Americans want the bill be approved and to legally play online poker.