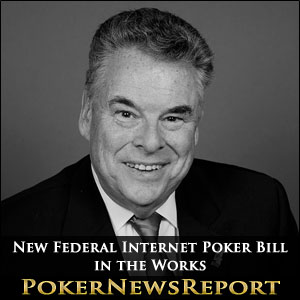 The new measure will reportedly restrict online gaming to poker, but has language that permits state lotteries to participate in ways that previous proposals had not. Last year’s Reid-Kyl bill that was never introduced in Congress received strong criticism from many groups for its failure to allow lotteries to offer forms of Internet gambling except for some daily lottery games.

The National Governors Association, Kentucky Lottery Corporation president Arthur Gleason, and Massachusetts lottery director Steve Grossman were among those who spoke out against the Reid-Kyl bill last year. That failed measure also came under fire for showing favoritism to the interests of Nevada casinos.

King’s proposal will apparently attempt to avoid those shortcomings, according to Kevin Fogarty, a King spokesman. Without revealing precise details, Forgarty told politico.com that the bill will be introduced shortly.

Part of the reason for the new legislation on the federal level is the ramped up effort of individual states to enact online gambling legislation. Nevada launched online poker on Tuesday when Ultimate Poker opened its virtual doors and began accepting wagers from Nevada residents and tourists. New Jersey and Delaware are also expected to follow suit later this year. In addition, several other states such as California, Pennsylvania and Illinois have been floating various online gambling proposals among lawmakers.

A federal bill would likely put an end to state-by-state regulations. Insiders have speculated that King and other federal legislators that are in favor of online poker legislation would like to pass a bill before Delaware, New Jersey and other states have a chance to get rolling. Nevada’s current scheme is limited to poker-only, but the other two states plan to offer a full slate of online casino games.

Earlier this year, Nevada Senator Reid expressed a desire to introduce his bill sometime this year. Whether he still has thoughts of continuing with those plans remains uncertain. However, it appears that King’s proposal may find more support among lawmakers if the new bill manages to address the issues that many found problematic with the Reid-Kyl proposal. Incidentally, co-sponsor Sen. Jon Kyl has since retired from office.

Most agree that a federal online poker bill is a far better format than a hodge-podge of laws enacted by individual states. Perhaps Tuesday’s roll out of the first legal real-money online poker action in the U.S. by Ultimate Poker will spur legislators to get moving on new legislation that will allow the entire country to play online poker. Except, of course, for those states such as Utah that choose to opt out of participating.