The US Attorney responsible for pursuing Full Tilt Poker in the legal action that followed Black Friday has today amended the complaint against the company to include allegations against Howard Lederer, Chris Ferguson, Ray Bitar and Rafe Furst on misusing player´s funds deposited into Full Tilt Poker accounts. 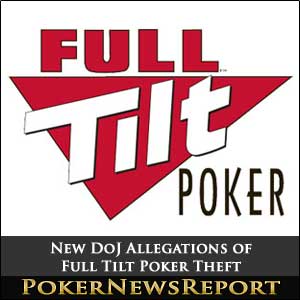 The US Attorney responsible for pursuing Full Tilt Poker in the legal action that followed Black Friday has today amended the complaint against the company to include allegations against Howard Lederer, Chris Ferguson, Ray Bitar and Rafe Furst on misusing player´s funds deposited into Full Tilt Poker accounts.

The Attorney for the Southern District of New York – Preet Bharara – claims in his amendment that the board of directors at Full Tilt Poker paid themselves $443 million in dividends from April 2007 – failing to maintain funds in the company accounts to repay players on demand.

Bharara said in a statement after announcing the amendment – “Full Tilt insiders lined their own pockets with funds picked from the pockets of their most loyal customers while blithely lying to both players and the public alike about the safety and security of the money deposited. Full Tilt was not a legitimate poker company, but a global Ponzi scheme”. Emails sent to players from the company in 2008 and 2009 stated that that “unlike some companies in our industry, we completely understand and accept that your account money belongs to you, not Full Tilt Poker”, but by March 2011 (two weeks prior to the DoJ indictments) Full Tilt only had $60 million or so in its bank accounts while owing $390 million to players around the world.

Evidence of Full Tilt Poker´s financial plight is included in the amended complaint with details of internal email communications in which Ray Bitar expressed concern that the company could not even handle a “five million run”. Dated in June 2011, Bitar wanted to block news of company lay-offs for fear of exposing the company´s true financial position and preventing new deposits – deposits the company desperately needed to stay operational.

The US Attorney has also requested that new minimum penalties be made against the four individuals named in the amendment. These penalties relate directly to claims of money laundering and are completely separate from any other accusations and fines the directors of Full Tilt Poker may face. Individually, these penalties are:-

Hope For The Future?

Although the news will not come as a big surprise to the thousands of online poker players who have had their bankrolls frozen by the closure of the poker site, this does offer some hope for the return of funds in the future. By acknowledging that the directors of Full Tilt Poker paid themselves substantial dividends at a time when there was an outstanding debt to the company creditors (the players), it now enables the civil suits against the company to go after the personal assets of the directors in order to recover money owing to the plaintiffs.

More poker news to follow on this story as it will obviously impact the proceedings at the Alderney Gaming Control Commission hearing currently taking place in London.