With under a month to go until the British Poker Awards, organisers have introduced seven new categories – three of which can be voted on by the public. 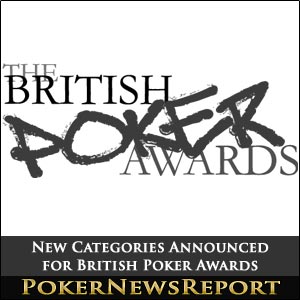 With under a month to go until the British Poker Awards, organisers have introduced seven new categories – three of which can be voted on by the public.

In addition to the new “public” categories of “Best Card Room Restaurant” and “Best Card Room Bar” (which we decline to give an opinion on – other than to say that the Genting Club bar in Liverpool deserves an honourable mention) readers are being asked to vote on who they believe has made the biggest contribution to growing and promoting poker in the UK.

This is a particularly tough category from which to choose one person who has contributed to the growth of both online and live poker in the UK and one that we will be sitting on the fence for! However, the nominations are:-

Two of the existing categories have also been extended to allow “late registration” for a couple of worthy nominees. The Discover Poker League has been added to the choice of leagues the poker public can vote for in the category of “Best Poker League”, while the Genting Poker Series at the London Fox Club has been included in the choices from which to select the “Best UK Tournament”

Their decisions and the results of the remaining categories at the British Poker Awards will be announced aboard the HMS President in London´s Embankment on Monday 17th September – one of the many star-studded events which form part of the London Poker Festival. You can make your vote count by visiting thebritishpokerawards.com