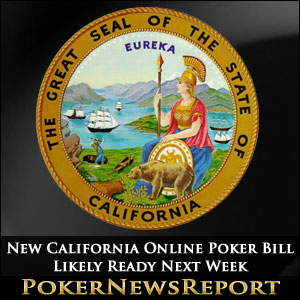 An online poker bill written and backed by powerful California tribal coalitions may be introduced to the state legislature next week.

Coalitions headed by the San Manuel Band of Serrano Mission Indians and the Pechanga Band of Luiseno Indians met again earlier this week to continue working on a draft of the proposal in hopes of submitting the final product to lawmakers in the first week of June. With the current legislative session scheduled to last through August, the tribes are hoping to obtain approval before legislators adjourn for the year.

Tribal lobbyist Jerome Encinas told eGR that Tuesday’s pow-wow between Pechanga and San Manuel went well and the next step is to discuss with legislators how we move forward.

A previous hindrance to completion of the bill centered around how many poker sites each licensee would be allowed to operate. While San Manuel proposed an unlimited number and Pechanga pushed for only one each, a compromise of two was reached.

Still unknown is whether another compromise was reached regarding the eventual inclusion of bad actors in the state’s Internet poker scheme. As many are aware, a partnership between PokerStars, the Morongo Band of Mission Indians and California’s three largest card rooms may still get in the way of the online poker bill finding favor in the legislature.

Previous rumors indicate that language in the proposal will allow PokerStars into the California market, albeit after perhaps paying a fine and/or waiting for an agreed upon time. However, this remains speculation until the bill is made available to the public.

The tribal-backed bill is also said to exclude the state’s racetracks, which would not have sat well with the lawmaker who had been spearheading the push for online poker legislation in past years. Sen. Roderick Wright, the author of previous i-poker bills that failed to be voted upon, attempted to include horse racing interests in his proposals.

Wright, however, is no longer chairman of the Senate Governmental Organization Committee that is in charge of the state’s gaming laws after a California jury found him guilty on eight felony charges that centered around residing outside of the district he represents. With Wright out of the way, racetracks may not win, place or show in the legislation that eventually crosses the finish line.

California is home to roughly 38 million, which places the Golden State on top of the 50 states in terms of population. The approval of online poker legislation would be a big deal and quite a boon for pro-Internet gambling forces who are hard at work attempting to stave off the efforts of the anti-online gambling crowd led by Las Vegas Sands CEO Sheldon Adelson.

On the negative side, online poker in California will likely be of an intrastate nature, ring-fencing the legality and participation within state borders. Many hope that eventually California can be persuaded to join an interstate pool with other states that also have enacted Internet poker legislation.