New AGCC Statement Does Too Little Too Late

A new statement on the AGCC site has failed to appease ex-players on Full Tilt Poker, furious about the way in which the licensing authority has handled the situation. 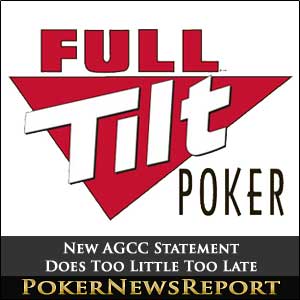 A new statement posted on the Alderney Gambling Control Commission web site has failed to appease ex-players on the Full Tilt Poker poker site, furious about the way in which the licensing authority has handled the whole Full Tilt Poker situation.

After the stating in the press release which announced the revocation of Full Tilt Poker´s operating licence that “Unresolved claims by players against FTP become a matter for the police and civil authorities. Now that FTP’s licenses have been revoked, AGCC no longer has jurisdiction over these companies” a new statement has been released in an attempt to address the ongoing concerns of Full Tilt Poker´s registered players.

Following the revocation of the licenses, AGCC no longer has authority to intermediate or arbitrate on player issues or disputes with Full Tilt (excepting for players registered under a Swiss address). Players may have the following alternative options:-

1. Full Tilt has been requested to provide a specific player contact: this is awaited and will be incorporated here upon receipt.

2. Any player who believes they are a victim of crime, as a result of their dealings with Full Tilt, should in the first instance contact their own local police in their country of residence and report the matter to them. These reports will then be co-ordinated centrally.

3. It is understood that a number of civil actions have been initiated by players against Full Tilt, some as class actions representing multiple players by UK, US and Canadian lawyers. Details of the firms concerned can be found through internet search.

The AGCC came in from a lot of criticism after last Thursday´s announcement for not allowing Full Tilt Poker to conclude commercial negotiations with Groupe Bernard Tapie before revoking the operating licence both from ex-players and the company itself. Full Tilt poker actually went as far as issuing a meaningful statement – accusing the AGCC of potentially damaging negotiations between themselves and Groupe Bernard Tapie – the day before announcing Tapie´s “intention to buy” the online poker site.

Sandwiched between the two statements on the AGCC web site, an interview was conducted with AGCC executive director Andre Wilsenach in which he described Full Tilt Poker as “wicked”. Refusing to accept any responsibility for failing to notice the $331 million shortfall in player´s fund (funds which were seized by the US Department of Justice between 2007 and 2011), Wilsenach revealed that the regulators first hand concerns in 2010, but it was not until earlier this year that the AGCC “started investigating” Full Tilt themselves with an external accountant and forensic auditors.

Will Full Tilt Poker and the AGCC Kiss and Make Up?

With animosity between the online poker site and its regulator at an all-time high, one wonders if Groupe Bernard Tapie will attempt to apply for the reinstatement of the operating licence from the Alderney Gambling Control Commission or whether they will look elsewhere. With the possibility of Full Tilt Poker´s existing owners being allowed to invest in the site, the AGCC may have reservations themselves about providing Full Tilt Poker with a license to operate, but maybe the final say will lay with the players. Already disenchanted with the way they feel betrayed by the AGCC (whether justifiably or not), the players may vote with their bankrolls (once they get access to them) and force Groupe Bernard Tapie to seek a regulator elsewhere.