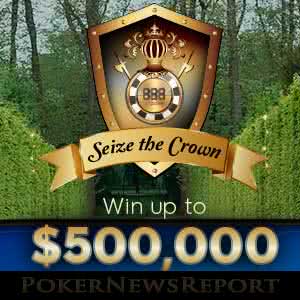 The frequency with which 888 Poker´s promotions change may not be as often as some would like, but the quality of them is definitely improving. In the latest “Seize the Crown” promotion, players can win worthwhile amounts of cash in two different ways, and be in with a chance of winning $500,000.

888 Poker´s latest promotion – “Seize the Crown” – is very straightforward in its concept, and potentially very rewarding. All you have to do in order to take part in the promotion is to opt-in via a “Join the Promo” pop-up window in the poker client or via a promotional email. Then, play real money poker games with a minimum stake of $0.02/$0.05 (cash games and SNAP poker) or with a minimum buy-in of $1.00 (tournaments, Sit & Go games, and BLAST Poker games).

When you win a hand after being dealt pocket Jacks, pocket Queens, or pocket Kings, you will be awarded a tournament ticket to a “Seize the Crown” freeroll tournament that takes place at 7:30pm (GMT) each evening. The freeroll tournament has a cash prize pool of $10,000 and, with more than forty days to go until the end of the promotion on Tuesday October 2nd, there is more than $400,000 up for grabs in free poker money for qualifying players.

Every player who plays in a “Seize the Crown” freeroll tournament is automatically entered into the Scratchcard Challenge. This part of the promotion awards a maximum of two scratchcards per day to players who win a hand after being dealt pocket Jacks, pocket Queens, or pocket Kings in the freeroll tournament. Each scratchcard hides one of six prizes; and although the likelihood is you will scratch off a $1 cash prize, the potential exists for winning $500,000 each time!

What we like about this promotion compared to some previous ones is that you win cash, not tournament tickets, casino free spins or limited-use sports bets. Furthermore, although the likelihood is the first time you scratch off a scratchcard you will win just $1, the more scratchcards you get, the odds of winning a more valuable prize increase. Don´t forget, you will also win more money the longer you survive in the “Seize the Crown” freeroll tournament.

How to Benefit from Multiple Promotions at the Same Time

Yesterday we wrote about how 888 Poker is – for a limited time only – hosting million dollar BLAST games with a buy-in of just $1. As the minimum requirement to qualify for the “Seize the Crown” freeroll tournament is tournament-style games with a $1 buy-in, it makes sense to play in the special edition BLAST games while waiting to be dealt a royal pocket pair. You could be in with a chance of sharing in a million dollar prize pool as well as qualifying for a promotion in which you could win a further $500,000.

The other promotion you can take part in at the same time – if you have not do so already – is 888 Poker´s first deposit bonus. This promotion matches your first deposit up to $600 with an equal amount in bonus funds that you clear as you play games of real money poker. As you have to have made a real money deposit in your account in order to be eligible for either the “Seize the Crown” promotion or the Million Dollar Blast promotion, now would be a good time to fund your account at 888 Poker.