Although busily preparing to launch intrastate online poker in the coming months, Nevada gaming officials would rather see legislation on a federal level. 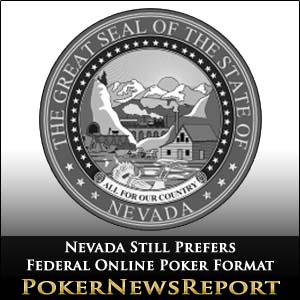 Although busily preparing to launch intrastate online poker in the coming months, Nevada gaming officials would rather see legislation on a federal level.

The Nevada Gaming Commission has approved several applicants for intrastate online poker licenses and the state is moving forward in its plan to be first to have Internet sites up and running. It looks as though South Point Poker may be ready to turn on the virtual switch as early as October following the conclusion of software testing by independent labs and plunking down a $500,000 license fee. As exciting and historic as that sounds, Nevada would still much rather see legislation enacted in a federal scheme instead of the intrastate model that is being readied.

There are many unknowns and potential problems that lie ahead for a state-by-state online poker format that would not have to be encountered if Congress were able to drum up enough support in order to advance federal legislation. First and foremost is the limited player pool found in the Silver State. Although tourists as well as Nevada residents would be able to participate online, it still looks as though Nevada may not garner enough liquidity to make the effort viable. Of course, if an interstate scheme were eventually implemented, that would solve the problem. But there is no telling how long that might take with other states such as California failing to approve legislation this year due to the inability of the state’s gaming interests to find common ground that satisfies all parties. A federal framework in which all states that chose to participate would be afforded such an opportunity would easily solve the liquidity problem.

Another concern of Nevada officials is if individual states expand online gambling to include all casino games. Nevada’s economy is centered around Las Vegas casinos that are dependent on tourists to not only gamble, but to also stay in its hotels and partake in the shows and nightlife. Gamblers in other states who can place any types of wagers online with a few mouse clicks may be reluctant to travel to Sin City as often as they may have in the past. That is a primary reason why Nevada’s online gambling legislation is poker-only and why gaming officials would like to see a federal scheme stick to the same idea. In fact, California’s online gambling proposal is also poker-only to appease the Indian tribes who don’t want to see a decrease in their brick and mortar revenue.

Supported by the American Gaming Association, most of the industry’s large gaming companies are pushing for federal regulations. Likewise for the Poker Players Alliance, who also see a federal framework of online poker legislation much more beneficial than a hodgepodge of laws by individual states. But there is only so much lobbying that can be done in Washington. The voices of the lobbyists have been heard. It’s up to Senators Jon Kyl (R-AZ) and Harry Reid (D-NV) to convince their colleagues that federal online poker regulation is the solution to the problems that seem inevitable in a state-by-state online poker format.

In the absence of federal regulations, Nevada gaming officials will continue with their intrastate model. Approving licenses and overseeing testing of roughly three dozen applicants hoping to get in on the game of online poker in Nevada. It’s definitely an exciting time for online poker in the U.S. But how it all pans out and whether it will work remains to be seen. So many unanswered questions would not be on the horizon if online poker was legalized on the federal level.