The Nevada State Assembly has passed a simplified Internet gambling bill that calls on the state to adopt a licensing procedure for online poker sites. 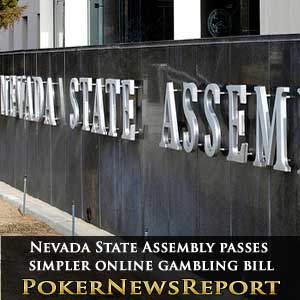 The Nevada State Assembly has passed a simplified Internet gambling bill that calls on the state to adopt a licensing procedure for online poker sites.

Just over a month after the United States’ online poker industry was hit hard on ‘Black Friday’ as Full Tilt, Absolute Poker and PokerStars were shut down by the Department of Justice (DoJ) for suspected bank fraud, money laundering and illegal gambling, there are concerns the industry will struggle to recover from the meltdown as fears still linger over possible federal indictments.

However, there was some good news as Nevada State Assembly members in Carson City were in complete agreement as they passed the bill that asserts regulators must create rules to come into effect once online gambling is legalized by the federal government.

The bill, which was supported by PokerStars, now goes before the Senate in Washington, but its sponsors expect it to be passed without too much trouble in the wake of the April 15 indictments placed on those three leading online poker sites that has resulted in their closure to US poker players.

The bill initially asked for the legalization of online poker in the state, but a policy committee cut the more controversial sections just four days prior to the public announcement of the federal indictments.

The bill now suggests that the Nevada Gaming Commission create regulations as well as a route to permits to allow online gambling by January next year.

Horne reckons that having these rules in place will mean Nevada can be ready “the day the [federal] law” is passed.