The Nevada Gaming Commission has asked state licensees and others for assistance in drafting regulations for interstate online poker compacts. 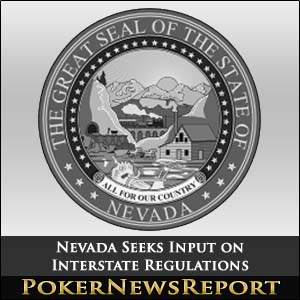 The Nevada Gaming Commission has asked state licensees and others for assistance in drafting regulations for interstate online poker compacts.

The Silver State recently enacted legislation allowing for partnerships with other regulated states in order to increase online poker player liquidity. But since such an endeavor is embarking on previously uncharted territory, gaming officials have put out a Notice of Request for Comments from those interested in having a say in the matter.

As posted on its official website, the commission is seeking input on such issues as whether revenue sharing between states should be determined by the location of where the wager is placed or the location of the licensed host. Also under consideration is what state should have the ultimate say in disputes that may arise between players in different states. Those who choose to comment on these issues should be prepared to cite legal statutes in support of their suggestions.

The commission also asks for input on other topics that should be included in interstate agreement regulations and any other matters of interest that may be beneficial in drafting said regulations. Comments are being accepted through April 12, 2013. Any replies to those comments must be received by April 19, 2013. Submissions will be accepted via postal mail, fax, or email at the following addresses: Sally P. Elloyan, Executive Secretary, Nevada Gaming Commission, 1919 College Parkway, P.O. Box 8003, Carson City, NV 8970. Facsimiles can be sent to 775-687-8221, while emails should be directed to selloyan@gcb.nv.gov.

The commission intends to hold a regulatory workshop in which all comments and suggestions will be considered. Drafting workable interstate regulations may be problematic for several reasons. One obvious snafu is the possibility of so-called bad actor provisions varying widely from state to state.

For instance, let’s assume that PokerStars is allowed to purchase the Atlantic Club Hotel Casino in New Jersey and enter the online poker marketplace through that state. Nevada’s existing law includes a provision that prohibits online gaming companies who serviced the U.S. market after Dec. 31, 2006, such as PokerStars, from being licensed for five years. Should Nevada and New Jersey form an interstate compact, how will that affect the fact that PokerStars would not be allowed in Nevada until 2018?