The Nevada Gaming Commission published suggestions received from its “Notice of Request for Comments” regarding interstate online poker regulations. 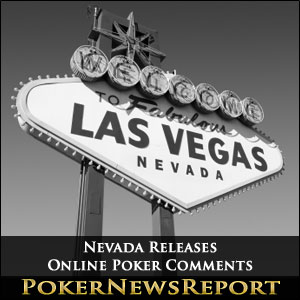 The Nevada Gaming Commission has published all suggestions received from its “Notice of Request for Comments” regarding interstate online poker regulations.

Last month, the commission solicited advice from the public as to the drafting of regulations on its interstate online poker scheme. In particular, gaming officials were interested in what gaming companies or individuals in the industry had to say about revenue sharing and the disposition of disputes among players from different states. Comments on other topics of interest in relation to drafting the interstate statutes were also welcomed.

The solicited suggestions were due by April 12 and any parties wishing to reply to those comments were asked to do so by April 19. All told, the commission received 15 comments from the likes of the Alderney Gambling Control Commission, 888 Holdings, SHFL Entertainment, bwin.party, and Caesars Entertainment. Two replies to the comments were also submitted by the deadline.

The Nevada Gaming Commission has published all comments received in their entirety for the public’s perusal and can be found at the commission’s official website, www.gaming.nv.gov. A regulatory workshop to discuss all suggestions submitted will be held by gaming officials at an as yet unannounced date.

Among the comments received, 888 Holdings suggested that calculating taxation and the allocation of revenue should generally be based on the physical location of the player. In making that suggestion, 888 Holdings COO Itai Frieberger felt that that method was the most simple to implement and pointed out that such arrangements currently exist in Europe’s regime, which is comprised of various jurisdictions.

Other comments submitted include SHFL Entertainment’s desire for one huge datacenter instead of each state carrying the burden of separate hardware centers. This would be beneficial in reducing administrative work and costs involved, stated Allen Fincher, SHFL’s Director of Technical Compliance and Product Assurance.

An interesting comment came from Dave Stewart as an individual who claims to have affiliations with online casinos since 2003. Stewart suggested that Nevada automatically allow players from all states to participate, provided those states don’t already have regulations forbidding online poker such as Washington or Utah. However, the legality of such a scheme would be questionable and perhaps only permissible on the federal level.

The Silver State was the first to enact online poker legislation in 2011, albeit on on intrastate format. Realizing that the state’s population of roughly 2.7 million would most likely not allow for a viable Internet poker scheme, lawmakers amended the statute in February to include interstate compacts.

Gaming officials felt the need to solicit comments from interested parties due to the fact that agreements between states related to legalized online poker is embarking on uncharted territory. With real-money online poker sites expected to be up and running in Nevada this summer, its crucial to iron out the details before the anticipated launch.