The Nevada Gaming Control Board recommended its approval of an online poker license for Bally Technologies on Wednesday. 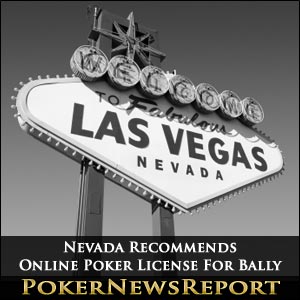 Nevada continued making progress as the first state expected to offer intrastate online poker when the Nevada Gaming Control Board recommended its approval of an online poker license for Bally Technologies on Wednesday.

The next step is securing approval from the Nevada Gaming Commission, which is scheduled to consider the matter June 21. Should the commission also render a favorable ruling–and its completely expected that they will–Bally will then have its technology tested to make sure it conforms with the requirements set forth by gaming officials.

Bally acquired Chiligaming a few months ago in preparation of offering online poker in the Silver State. As a manufacturer and operator of Internet gaming systems, Bally must join forces with an existing Nevada casino in order to provide its services in the state and will not be licensed to run a site independently. To that end, Bally already has a partnership agreement in place with Golden Nugget Casino that was brokered just a couple weeks prior to the purchase of Chiligaming. A free-play site is already operating under that collaboration and a switch to real money should be an easy transition.

Bally’s fee to acquire a license is $125,000, but could be reduced dependent on the whims of the Nevada Gaming Policy Committee. However, that fee is but a miniscule fraction of the $30 million licensing fee that California is proposing in its latest online poker bill.