Nevada Player Traffic Up 9% at WSOP.com

As expected, the influx of pro poker players in Las Vegas for the WSOP has increased player traffic at WSOP.com in the Nevada online poker market. 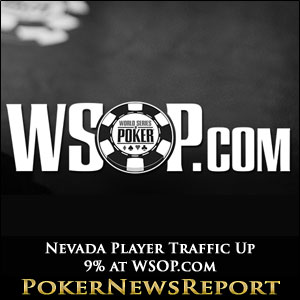 As expected, the influx of pro poker players in Las Vegas for the WSOP has increased player traffic at WSOP.com in the Nevada online poker market.

Cash game player traffic is up 9% since the 45th annual World Series of Poker kicked off on May 27. The spike in traffic is even larger during evening hours while a Multi-Table Madness promo is in effect.

That promotion calls for the selection of a cash game poker hand at random nightly in which all players receiving hole cards can earn an additional $100 bonus. Even more bonus cash is available to the winners dependent upon how many tables are being played simultaneously.

Ring game traffic during the promotion has increased as high as 17% at WSOP.com, as pro players are known to be proficient multi-tablers. While the bonus money available is seemingly just a fraction of the buy-ins of the live WSOP events that players are in town for, the promotion certainly hasn’t hurt WSOP.com’s desire to stand apart from its rival, Ultimate Poker (UP).

UP, meanwhile, has lost cash game player traffic since the live festival began one week ago. Player numbers are down 9% at UP, coincidentally the same percentage of the increase in action at WSOP.com.

The tiny Nevada online poker market, which recently passed 13 months in operation, continues to chug along despite a small player pool to draw from among Silver State residents and tourists. The 170 cash game players that both sites currently average combined remains well off the pace of the 200-plus players seen during the regime’s peak many months ago.

As has been stated previously and perhaps bears repeating, interstate partnership agreements are needed in order to increase liquidity and improve the overall viability. One such partnership with Delaware is being readied for launch, but more are required to make regulated state-by-state [geolink href=”https://www.pokernewsreport.com/us-poker-sites”]online poker in the U.S.[/geolink] a truly successful endeavor.

Good news regarding that situation may be on the horizon as Pennsylvania lawmakers will hold a hearing today designed to contemplate and debate the merits of online gambling legislation. A Keystone State legislator also has announced his intention to introduce an online poker bill later this month.

Also expected this week is the release of an online poker bill drafted by a coalition of California Indian tribes. While the country’s largest state appears intent on offering its proposed online poker scheme only to those within the Golden State, perhaps lawmakers can eventually be persuaded to enter into interstate compacts.

The WSOP will run through mid-July in Nevada. First-time depositors interested in playing online while not competing in live tournaments are eligible for a 100% up to $1,000 bonus at WSOP.com.