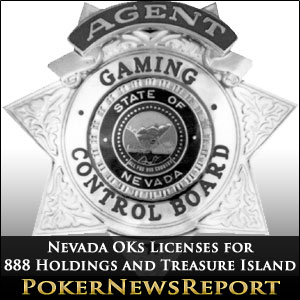 888 is based in Gibraltar and services much of the European market. Since the company is not local, the commission spent a bit more time scrutinizing 888’s application. Two weeks ago, the Gaming Control Board also thoroughly analyzed the company’s merits, spending nearly two hours asking questions. Representatives of 888 Holdings survived the intensive question and answer sessions and are set to be a big player in Nevada’s online poker regime.

888 has cemented a partnership agreement with Caesars Interactive Entertainment to operate a WSOP-branded online poker site in the Silver State, which the pair have already done in Europe. The company also has a deal with Treasure Island Hotel and Casino, Thursday’s other approved licensee, to provide software on a Treasure Island website. A third partnership with WMS Industries calls for 888 to provide gaming technology.

888 Holdings reported gambling revenue of $376 million last year, which was 13% higher than 2011 and the company’s best total ever for a single year. The UK market accounts for 43% of company earnings.

888 Holdings and Treasure Island were granted the 20th and 21st interactive gaming licenses in Nevada. While gaming officials are busy approving licenses, independent testing labs are also working feverishly on testing software technology of the licensees. Many people thought that Nevada would have sites up and running by now, but unforeseen delays have pushed back projected launch dates. The Silver State is still expected to beat both Delaware and New Jersey in the race to be first in operating [geolink href=”https://www.pokernewsreport.com/online-poker-rooms”]online poker sites[/geolink].