Nevada OK With Online Poker Only …. For Now

As the online gambling launches of Delaware and New Jersey are fast approaching, many wonder if Nevada plans to add casino games to its Internet offerings. 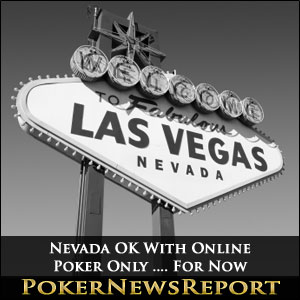 As the online gambling launches of Delaware and New Jersey are fast approaching, many wonder if Nevada plans to add casino games to its Internet offerings.

Nevada was first out of the gate to offer legalized online poker to state residents and tourists when Ultimate Poker went live on April 30. But Nevada’s legislation calls for online poker-only, which came as a bit of surprise to some.

The Silver State has been the most popular destination in the U.S. for casino gambling for decades. And more than a few people were perplexed as to why Nevada passed its Internet gambling bill excluding casino games from its online menu.

Was it because state officials were concerned that providing too many online choices would cause gamblers to perhaps stay away from the brick and mortar casinos? Yes, that was and is likely a huge concern to the overall bottom line. Lower attendance would cause a domino effect of lower revenue at hotels, shows, bars and restaurants throughout the state.

It appears that Nevada has not changed its thinking in that regard and will continue to stay with only online poker. A recent Nevada Gaming Commission meeting whose agenda included modifications to the online gambling statute did not include the addition of Internet casino games.

Gaming Control Board Chairman A.G. Burnett told the Las Vegas Review-Journal that the status quo will remain for now. He pointed out that the state’s regulated online poker scheme is only six months old and is still not yet fully established. Many more online poker sites are expected to join the party in Nevada in coming months.

Also likely soon to be in the works are interstate compact agreements with Delaware and perhaps New Jersey. Preliminary discussions have taken place, but first those two states must launch their online gambling regimes. Delaware’s rollout will commence October 31, while New Jersey will be right behind four weeks later on November 26.

And Nevada officials will be watching closely to see how revenue at each state’s land-based casinos will be affected. Odds are that Atlantic City casinos cannot do much worse after watching revenues decline steadily the past seven years. The proliferation of casinos in neighboring states is seen as the reason for that.

But for now, Nevada will remain poker-only and continue to take conservative steps, said Assembly Majority Leader William Horne (D-Las Vegas). He added that there is nothing preventing gaming officials to someday go beyond online poker in their Internet offerings. However, the state will first play its cards close to the vest while observing the goings-on in New Jersey and Delaware.