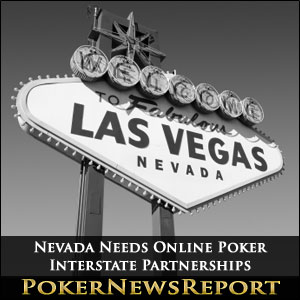 Ultimate Poker launched on April 30 and industry observers have been analyzing the results thus far as somewhat of a test case. The launch has been deemed a success with the country’s first legal site inching up to 32nd place. That ranking has been achieved only from Silver State residents and tourists.

The numbers show a consistent seven-day average of roughly 200 players. This total has remained constant for at least the last two weeks. And with many of the world’s greatest players in town for the 43rd annual WSOP, indications are that the ceiling may have been reached in regards to growth.

While the current player traffic numbers may be acceptable for one poker site, keep in mind that WSOP.com and several other regulated sites will soon be up and running as well. With that much competition vying for the limited amount of players available considering Nevada’s population of about 2.7 million residents, player traffic is likely to be spread very thin.

Nevada lawmakers are fully aware of this and have acted accordingly. Governor Brian Sandoval signed legislation allowing for interstate compacts in February. Recent legislation has also advanced that would expand player pools beyond U.S. borders and allow for international agreements to enhance liquidity.

It is safe to say based on statistics to this date that Nevada’s online poker scheme would not be sustainable without such partnerships. New Jersey and Delaware are expected to go live with their online poker offerings later this year. Though there have been no reports of agreements with Nevada being discussed or reached, it would certainly be advantageous to do so sooner rather than later.

Other states have also been considering online poker and gambling legislation. Though progress has slowed somewhat in that regard, most industry experts are in agreement that the more states that join together, the merrier.

In the same vein, collaborations with [geolink href=”https://www.pokernewsreport.com/online-poker-rooms”]online poker sites[/geolink] operating overseas can only benefit the small player pool that Nevada currently draws from. Let’s hope that such agreements can be forged shortly after other licensed online poker operators in Nevada make their long-awaited debuts. The Silver State’s online poker regime depends on it.