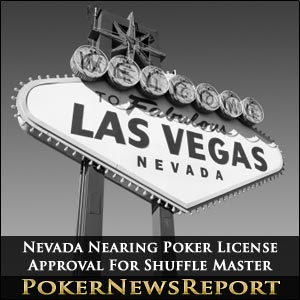 The gaming manufacturer hopes to join Bally Technologies and International Game Technology, who gained approval from the Nevada Gaming Commission last month. Shuffle Master is a similar entity to IGT and Bally, falling under the “manufacturer/provider” category set to offer online gaming systems.

Shuffle Master’s suitability approval comes just a few days following its announcement of backing out of a deal to acquire the Ongame Network from Bwin.Party, the network’s owners. A €29.5 million deal to purchase the network had been in place, but Shuffle Master re-evaluated the acquisition and decided to take a pass due to anticipated economic hardships in the European market.

It has become evident to us that Ongame’s operations post-acquisition will not achieve the near-term results we initially expected and will require a larger ongoing investment than anticipated, Shuffle Master CEO Gavin Isaacs said following the decision to nix the deal.

With over 30 companies applying for online poker licenses in Nevada, the process of gaming officials granting approval to license applicants has just begun. However, it appears that the Silver State is still on course to have the first intrastate online poker sites up and running by late this year or early in 2013. The rubber-stamped approval of Shuffle Master is fully anticipated to go down without a hitch.

PaddyPower also went before gaming officials in the suitability process, but not as an applicant of an officially recognized gaming license. The sports betting firm based in Ireland was merely going through the investigation process prior to hopefully expanding its business in Nevada. PaddyPower is an entirely different company than the other three license applicants, already serving the market with an online poker site. However, it has no apparent ties to U.S. businesses, including Nevada casino companies. PaddyPower leads the online gambling market in the UK and also serves large regions in both Canada and Australia.