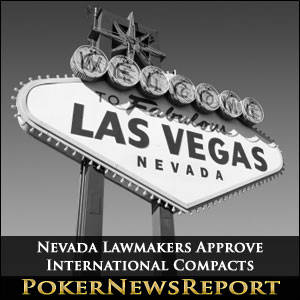 Online poker has been legally running in Nevada for slightly more than one month. But lawmakers are not sitting idly by and watching the developments unfold. They continue tinkering with the legislation in an effort to make the regime viable and profitable.

Another potential impediment to expanding player pools is on its way to being lifted as Assembly Bill 360 was unanimously approved by the state legislature earlier this week, calvinayre.com reported. The bill allows Nevada to enter into partnership agreements with tribal and foreign governments. Such a scheme is likely to go a long way in increasing liquidity.

The impetus of the new law may have come from suggestions accepted by state gaming officials on how best to regulate interstate compact agreements. Several months ago, the Silver State invited interested parties to comment on their online poker legislation and offer advice. The Alderney Gambling Control Commission (AGCC) did just that, suggesting that lawmakers amend their legislation to include international compact agreements.

While the AGCC may best be known for looking the other way while mismanagement brought down the original Full Tilt Poker, they were certainly on the ball with regards to offering tips to Nevada regulators. After Governor Brian Sandoval signs off on his approval of the international compacts, Nevada’s online poker sites may eventually include players in jurisdictions overseas.

As far as bad actor provisions go, international operators must also adhere to laws already in place in Nevada. That means that Nevada’s current five-year ban on sites that catered to the U.S. market post-UIGEA remains intact for potential operators located offshore.

Thus far, Ultimate Poker is the only online poker site operating in Nevada. Caesars Entertainment is in the on deck circle and will unveil its real-money offering sometime this summer. Earlier reports indicate that Treasure Island may also be launching its site in coming weeks. Pursuant to AB 360, those sites and others can expect to one day be including players worldwide. Let’s hope that day arrives sooner rather than later.