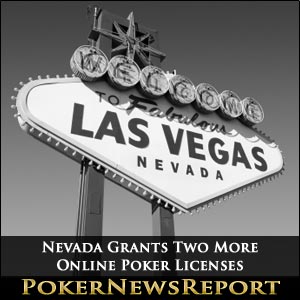 WMS Gaming Inc. and American Casino & Entertainment Properties (ACEP) received approval from the Nevada Gaming Commission on Thurday, with the former obtaining rubber-stamping in the category of manufacturer and the latter licensed as an operator. ACEP runs a number of Nevada casinos, including Stratosphere Hotel Casino and Tower, Aquarius, and Arizona Charlie’s. WMS recently partnered with 888 Holdings and will look to team up with a brick and mortar casino in accordance with Silver State regulation requirements.

ACEP and WMS join Shuffle Master, International Game Technology, South Point Poker, Bally Technologies, Monarch Interactive, and Global Cash Access Holdings as entities that have received online poker licensing in Nevada. South Point Poker leads the way in the race to be the first up and running online site and is aiming for a real-money launching date sometime this fall following the completion of testing requirements.

WMS and ACEP were not the only companies garnering approval from the gaming commission Thursday, as PokerTrip Enterprises received a marketing license as the first business allowed to promote online poker sites in affiliate marketing. The Las Vegas company will target Nevada residents and tourists and promote various online poker rooms, receiving a percentage of the rake that each one of its sign-ups generates while playing poker on the sites.

There have been roughly three dozen applications submitted to Nevada gaming officials for online poker licenses in either the manufacturer, operator or service provider categories thus far. The most recent applicant to throw their hat into the ring is Vintage Vegas Gaming, operator of Binion’s Gambling Hall & Hotel–which happens to be the birthplace of the World Series of Poker. From 1970-2004, poker’s most well-known tournament series was held at Binion’s until Harrah’s bought the casino and the WSOP brand. Harrah’s is now Caesars Entertainment and has retained the WSOP rights, but sold Binion’s in 2008 to Vintage Vegas Gaming, who have apllied for licensing in each of the three categories.