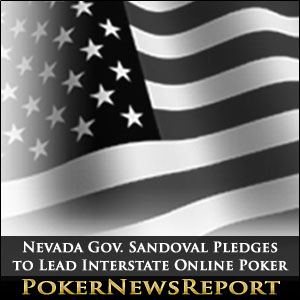 Sandoval’s speech was rather upbeat considering that the Silver State continues to lead the nation in unemployment at 10.8 percent. However, the governor stressed that Nevada must continue to lead in other ways, and no opportunity is as rich with promise as our primary industry, gaming.

Nevada approved online poker regulations in 2011 and is preparing to have the first sites up and running in the early part of this year. Industry observers are quick to point out that the state’s population may be too small to provide an adequate player pool for an online poker scheme. So Nevada legislators are seeking to amend the state’s current statute in order to allow interstate compacts with other states who eventually approve online gambling regulations.

Thus far, only Delaware has followed suit and passed Internet gambling legislation. But the New Jersey legislature has approved a measure that awaits only the signature of Gov. Chris Christie that will add the Garden State to the mix of prospective interstate partners. Additional states such as California, Iowa and Illinois may also get into the game sometime in 2013.

The Nevada Gaming Control Board will bring legislation to eliminate Nevada’s statutory barriers to interstate online poker, and ask for authority to enter into interstate agreements, Sandoval stated from Carson City in an address that was broadcast throughout the state. Nevada has always been the gold standard of both gaming regulation and operation, and I intend to see to it that our state will lead the world into this new frontier. Sandoval requested that state legislators pass the proposed bill within the next 30 days.

Without mentioning it by name, Sandoval did point out that the failure of federal lawmakers to act on the Reid-Kyl bill is making it necessary for individual states to enact their own online gambling legislation. Critics of the Reid-Kyl bill said that the proposal was much too beneficial for Nevada casinos and cite the reason being that co-sponsor Reid is a Nevada Senator and that he drafted the bill in the Silver State’s favor.