Nevada Gaming Commission is expected to announce their decision to regulations that will move forward plans to introduce intra-state poker within the western USA state. 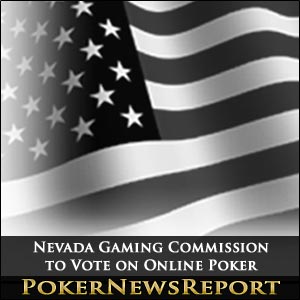 The Nevada Gaming Commission is today expected to announce their decision in relation to projected regulations that will move forward with plans to introduce intra-state poker within the western USA state.

Commissioners should vote on the proposals later today and, if passed, will establish a situation that will enable interested parties the option of making applications for licences within Nevada.

The Associated Press pointed out that the introduction of these latest online poker rules within the USA’s leading gambling state is very likely if the vote is positive, leading to a swift development in Nevada’s goal in establishing a profitable new source of income for the state – if, of course, Congress passes any of the proposed measures aimed at legalising online poker.

Online Poker Rooms on the Horizon

While Congress drags its heels over that decision, Nevada Gaming Control Board chairman Mark Lipparelli spoke to the news agency about the future of online gambling within the state, pointing out that [geolink href=”https://www.pokernewsreport.com/online-poker-rooms”]poker rooms[/geolink] could be established sooner rather than later – no matter the outcome of the national government body’s long-awaited ruling.

He said: In the meantime, Nevada’s new regulations could allow the state’s casino companies to operate gambling websites limited to players within Nevada’s borders.

Lipparelli also added that gambling websites restricted to the borders of Nevada could well be online and active by January 1 of next year – assuming the Nevada Gaming Commission approves the findings today.

As might be expected, with Las Vegas being the centre of all gambling within the States, Nevada is aiming to establish itself as the initial state to regulate online poker within the North American nation – basically grabbing an advantageous position from the likes of Washington DC, Iowa and California, all of which are right now discussing similar proposals as Nevada.

MGM Team Up with Bwin.Party Digital as Vote Looms

As such, numerous land-based and internet gambling firms are jockeying for position in the developing market in the States, resulting in alliances being established and government lobbying being common.

Included among those attempting to get an early foothold in negotiations are MGM Resorts International, who have only just revealed their joint venture with Bwin.Party Digital Entertainment plc – which is a key player on the European gambling scene, aiming to become the number one [geolink href=”https://www.pokernewsreport.com/us-poker-sites”]online US poker site[/geolink].

Also looking to get one step ahead of the competition are Gibraltar-based 888 Holdings in conjunction with Caesars Entertainment, while the Fertitta family – who own Station Casinos – only recently bought Cyberarts, an online poker software developer, so should be considered prime candidates for licences if and when new laws are introduced.

But it’s not just nationally recognised companies that are aiming to win licences as the likes of local land operator Michael Gaughan – who runs the South Point Casino, Hotel and Spa – has already employed website experts so that his firm will be ready to take advantage of any fresh financial streams when new laws are introduced.

Gaughan did, however, point out that he has “always been somewhat against” the intra-state legislation, although he added that, “if it’s going to come, I don’t want to be left at the station”.

Intra-State Poker Legislation Not Favoured by All

Additionally, as AP pointed out, not every land-based company supports intra-state poker legalisation.

In fact, MGM and Caesars Entertainment favour a solution being recognised at federal level as opposed to state-established laws.

These firms are worried that separate state initiatives will result in problems related to attracting enough customers to create a vibrant market, while also being concerned that a number of states will deliver “sub-par” regulations.

Alan Feldman, a spokesman for MGM, spoke with AP about his firm’s fears, saying: “There is an imperative for the federal government to act.”

Meanwhile, software provider US Digital Gaming – which develops and sells software to buyers in a ready-to-use form – believes that online poker rooms would have to attract no less than 70,000 active customers to make any venture financially viable.

Big bucks Could be Earned

If that target was reached, US Digital Gaming reckons that approximately $180 million a year in revenue could be hit inside 18 months.

However, that might be a problem as PokerScout – the independent online poker traffic monitor – believes that just 25,000 online players could be found within Nevada before the events of Black Friday back on April 15 this year, when the likes of PokerStars, Full Tilt Poker and Absolute Poker were closed down by the US Department of Justice (DoJ).

An article within the PokerScout website pointed out: Gaming Control Board chairman Mark Lipparelli and others argue that, under the new regulations, online poker is likely to be legal within Nevada borders as long as operators prove they limit the bets geographically.

Bolstering that position, he said, is the fact that the state has already allowed several companies to offer web or mobile sites inside the state for sports betting without opposition from the federal government.

The former US District Court for the District of Nevada judge spoke to RGJ.com about the future of internet gambling within his state, saying he believes that, if lawmakers do “pass legislation that positions Nevada – if internet gaming is approved at the federal level” – they will ultimately “lead the way” in any intra-state market.

The former Nevada Gaming Commission chairman chatted with the Reno Gazette-Journal about the future of online poker rooms in his state, saying that, while he doesn’t agree with Las Vegas Sands Corporation hotel and casino magnate Sheldon Adelson’s assertion that internet gambling should not be allowed, he does “respect” his beliefs.

Sandoval continued by emphasising that Adelson “is one of the gaming titans” and, after having “had had these conversations with him about internet gaming and internet poker”, he understands “where he is coming from”, but will wait to “see how all of this shakes out”.

Nevada Must “lead the way”

The former attorney general for Nevada added that, although he cannot “predict what will happen at a federal level”, he believes that his state must continue “what we have been working on”.

He is obviously in favour of legalising online poker, stating that Nevada has been “able to pass legislation that positions” his state, “if internet gaming is approved at the federal level, or internet poker…to lead the way”.

The 48-year-old is proud of Nevada’s poker traditions and wants that to remain once new legislation is passed.

He added: “Historically, Nevada has always been number one, and we have to maintain that position in gaming.

“The Gaming Control Board has already approved regulations with regard to internet poker in Nevada. The Gaming Commission will likely adopt those proposed regulations this month, but I can’t predict the outcome of that.

“If indeed the day comes that the federal government approves internet poker, Nevada is already in the position to be first in terms of investigating those who would seek a licence, and Nevada would have the regulatory structure to be the first out of the gates.”

It all seems pretty clear-cut for Nevada, but today’s vote should make the future of online poker within the state much clearer – and almost certainly provide other states with the opportunity to follow in their footsteps.

We here at Poker News Report will, of course, keep you informed of all developments of online poker within the USA, so don’t forget to bookmark us for ease of return.