Nevada gaming officials have been busy crafting new rules for online poker sites to follow that are somewhat different than current industry standards. 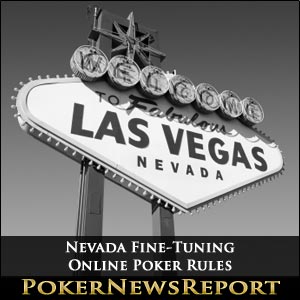 Nevada gaming officials have been busy crafting new rules for online poker sites to follow that are somewhat different than current industry standards.

Player-to-player transfers have long been a staple of online poker that allowed players to loan money to others or arrange various staking agreements. The practice will be disallowed in all online poker sites in Nevada in new regulations set forth by the Nevada Gaming Commission. In an effort to avoid any impropriety, including concerns of money laundering, Nevada will allow each player to make transactions only with the sites’ own system for deposits and withdrawals. This is a vast difference from practices used since the early 2000s in which several sites actually seemed to encourage the transfer of funds among players.

Gaming officials have also created new rules for players who are endorsing or have a sponsorship agreement with any Nevada online site. Players binded by such agreements must be fully identified while playing at online tables, which will seemingly prohibit players from perhaps receiving endorsement benefits under secondary accounts. A whole new market for popular poker professionals is expected to be available upon the launching of the new online poker sites in the Silver State.

Also under consideration is the addition of new language in rules regarding a “service provider” classification of online poker licensees. Service providers will be categorized in accordance with their specific functions. For instance, firms that focus on geo-location and ensuring that players who log on are actually within Nevada’s borders will be identified as such. Likewise for licensees whose primary functions will be payment processing and player identification. Instead of falling under a broad “service provider” category, Nevada regulators have narrowed the classifications to allow for easier application processing and stricter control.

Geo-location is a big concern of regulators, as Nevada’s neighboring state of Utah has specifically outlawed online gambling. Should Utah residents manage to somehow misidentify their location and log on to the Nevada sites, it could prove to be a huge embarrassment and cause major problems for Nevada gaming officials.

Online poker regulations were enacted in Nevada in December of 2011. State officials are allowed to modify and adjust the rules as they see fit. The fine-tuning of such regulations is in preparation for the first online poker site to be up and running perhaps as early as next month. South Point Poker is expected to be ready to turn on the virtual switch in October, making history as the first legal online poker site from the U.S.