Prior to the launch of Ultimate Poker in Nevada on April 30, much was made about the benefits of being the first state to offer legalized online poker. 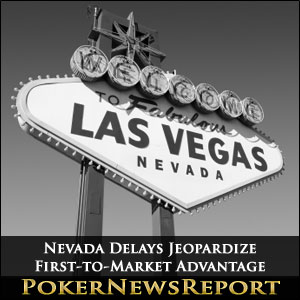 Prior to the launch of Ultimate Poker in Nevada on April 30, much was made about the benefits of being the first state to offer legalized online poker.

Many industry veterans were of the mind that the state who managed to be first out of the gate would enjoy a first-to-market status that would allow it to become the hub of U.S. online gambling. The theory was that other states would pattern or copy that first state’s legislative and licensing efforts and be inclined to accept whatever compact stipulations the first state had cooked up.

Nevada won the race, but the repeated delays in licensing and software testing are jeopardizing the Silver State’s first mover status. New Jersey and Delaware are aiming to rollout their respective online gambling regimes very soon and may wind up making Nevada look bad in the process.

Many are beginning to wonder exactly what the hold up is that’s causing Nevada’s regulated online poker sites to be moving at a snail’s pace with regard to launching. It was roughly one year ago at this time that South Point Poker claimed to be ready and nearing a ‘go live’ date. But Ultimate Poker beat them to the punch and remains the only regulated site operating thus far.

Some believe that Nevada officials are taking their time and aiming to get it right. Extensive testing is apparently underway to make sure that the sites conform to the rigid standards set forth by gaming officials. But how high are those standards considering all the problems experienced by Ultimate Poker upon launching?

In any event, New Jersey and Delaware are coming soon. And their online gambling schemes include casino games that Nevada’s poker-only format does not. That in itself may become an advantage that Nevada may regret in the future. Allowing only online poker while other states offer a full slate of Internet gambling may keep Nevada from being the go-to state that it was hoping to achieve by being first.

Delaware’s online gambling launch has been pushed back to late October, while New Jersey has targeted November 23 as its goal. Should both of those projections come to fruition before Nevada launches any other of its newly-licensed poker sites, Silver State regulators may face a great deal of scrutiny regarding the length of time needed to get rolling.

Las Vegas has long been known as the gambling capital of the U.S. Nevada lawmakers and gaming regulators were hoping to continue that tradition by being the first to expand legalized gambling to the Internet. But if the delays in progress continue much longer, Nevada may very well end up throwing away that first-to-market advantage and watching New Jersey become the center of online poker and gambling in the U.S.