Player pools in both Nevada and Delaware may soon be combined as an interstate partnership agreement between the two states is set to take place. 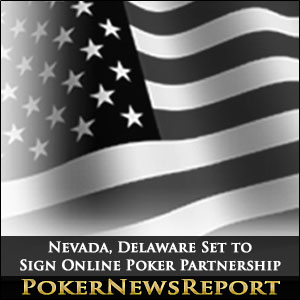 Player pools in both Nevada and Delaware may soon be combined as an interstate partnership agreement between the two states is set to take place.

Wilmington, Delaware is the location of the history-making deal to be forged today by governors Jack Markell and Brian Sandoval of Delaware and Nevada, respectively. It is not known at this time when the online poker schemes of both states will begin to intersect, as a number of details will likely need to be ironed out by each state’s gaming regulators first.

Delaware saw its revenue from online poker jump from $67,928.42 in its first month of operation in November to $106,922.76 in December. But Internet poker rake slid back down last month to $88,390.48, the Delaware State Lottery reported. The 17% drop occured despite more than 1,000 new players registering at the state’s three Internet gambling sites combined.

More than 5,000 players have now established accounts in Delaware’s online gambling scheme. When compared to the almost 200,000 signups in New Jersey, and in light of poker revenue taking a hit in Delaware last month, it’s not surprising to see an interstate agreement with Nevada finally in the offing.

Nevada is now home to three online poker sites, with Real Gaming from South Point Casino joining WSOP.com and Ultimate Poker last week. With a couple hundred cash players normally logged onto the virtual felt in Nevada, the addition of Delaware’s rather minute player pool can only help. What’s really needed is for New Jersey to also climb aboard, but perhaps that deal can be worked out at a later date.

Delaware Online reports that Sandoval and Markell will have their pens ready at about 11:00 a.m. today. Hopefully, the newly-formed alliance will persuade other states who have been contemplating online poker regulations to step up efforts at enacting legislation. The desire of many poker players throughout the U.S. is to see Internet poker regulated all over the country with large player pools due to a number of interstate partnership agreements.