Previously aiming to merge their online poker player pools by the end of this year, it now appears that a summer launch may be doable for Nevada and Delaware. 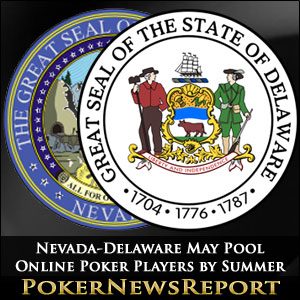 Previously aiming to merge their online poker player pools by the end of this year, it now appears that a summer launch may be doable for Nevada and Delaware.

Last month, the two states made history when Nevada Governor Brian Sandoval and his counterpart from Delaware, Gov. Jack Markell, signed the nation’s first interstate compact agreement to share Internet poker liquidity. Delaware Finance Secretary Thomas Cook indicated at the time that it may take until the latter portion of 2014 to put the plan into place.

The time table has apparently been moved up several months, with Sandoval now hinting that player pools may be combined as early as this summer, the Las Vegas Review-Journal reported. That would be beneficial to both states, albeit not that much. Nevada and Delaware are ranked 35th and 45th in terms of population, respectively.

The welcome mat has been extended to other states to join the Multi-State Internet Wager Agreement, but only New Jersey could legally accept at this time. As far as the dozen or so states that may be considering online poker and gambling legislation, Sandoval said that those states are invited to use our capabilities with regard to a sophisticated regulatory structure.

Preliminary discussions have taken place with New Jersey Governor Chris Christie to join the interstate agreement, but so far the Garden State has yet to take the plunge. Sandoval has also broached the topic with governors of a number of other states. Illinois, Pennsylvania, California and Massachusetts are a few of the states where lawmakers have addressed the possibility of online gambling legislation.

Nevada’s online poker scheme is just shy of 11 months old and averages well below 200 cash players at this time. Delaware, with about one-third the population of Nevada, reaches a peak of a few dozen online poker players on good days.

Nevada, the only state of the three offering only poker and not online casino gaming, has no intention of expanding into other Internet gambling options. Sandoval said that poker-only works well for the Silver State, assuring that brick and mortar gambling revenue won’t be affected by the limited gaming available online.