With its online poker launch only a little more than three months old, Nevada will likely have a compact agreement in place with New Jersey by 2014. 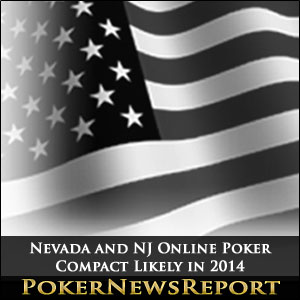 With its online poker launch only a little more than three months old, Nevada will likely have a compact agreement in place with New Jersey by 2014.

That prediction was made by MGM Resorts International chairman and CEO Jim Murren in an interview with Reuters. Nevada State Gaming Control Board chairman A.G. Burnett confirmed as much by stating that research regarding interstate compact agreements is nearing completion.

New Jersey has three times the population as that of Nevada and a partnership would be highly beneficial to both states. But colloborative efforts will likely not end there, as Murren estimates that some 40 states are considering online gambling legislation. California, Illinois and New York are among the states pondering Internet gaming regulations that may eventually join in the game.

While New Jersey prepares and remains focused on its November Internet gambling launch that includes online casino games, Garden State gaming officials are mindful of increasing online poker liquidity with other states. New Jersey Division of Gaming Enforcement honcho David Rebuck stated that expanding player pools with other jurisdictions is an opportunity sure to be taken advantage of in the future.

The pooling of resources among states is expected to provide greater protections for consumers. Individual states will have safeguards in place to identify underage and problem gamblers, as well as location verification techniques to make sure that players are within the borders of participating states. But teaming together in these efforts can only help in preventing identity theft and the fraudulent use of credit cards.

Regulated online poker in the U.S. became a reality on April 30, 2013 with the launch of Ultimate Poker in Nevada. That followed roughly a dozen years of unregulated online poker that included the domain seizures of the industry’s top three poker sites in 2011. While unregulated play continues at [geolink href=”https://www.pokernewsreport.com/us-poker-sites”]U.S.-friendly sites[/geolink], many Americans are hoping that regulation eventually takes hold nationwide so that a debacle such as that at Full Tilt never happens again.