The Nevada Gaming Commission has agreed to regulations that make Nevada the first in the USA to move ahead with plans to allow intra-state online poker. 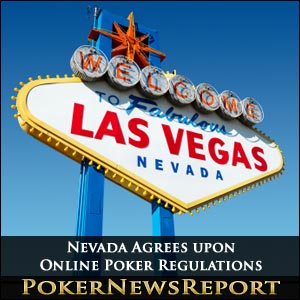 The Nevada Gaming Commission has agreed to regulations that make the western state the first in the USA to move ahead with plans to allow intra-state online poker on what has been described by one industry insider as “an important day for gaming control everywhere”.

As was expected, the regulations – the 11th edition after a series of revisions – have been adopted following a universally accepted and undisputed vote that took place on Thursday, as vegasinc.com reported in the early hours of this morning.

Expect states such as Washington DC, Iowa and California to follow Nevada’s example in the near future as the USA gets to grips with the financially damaging fallout of Black Friday back on April 15, when the Department of Justice (DoJ) shut down some of the nation’s leading [geolink href=”https://www.pokernewsreport.com/online-poker-rooms”]online poker websites[/geolink], including Full Tilt Poker, PokerStars and Absolute Poker.

But this latest popular decision – welcomed by many within the industry – will see Nevada move forward with their scheme to offer businesses the opportunity to apply for online poker licences, although no inter-state play will be permitted following the severe restrictions forced upon the industry by the US Department of Justice (DoJ).

Firms aiming to gain a licence to set up internet poker rooms within Nevada will go through extensive regulatory checks, with the newly established rules requiring that applicants demonstrate the capacity to control player registration, ensure that customers are of legal age to sign up to play, offer the rules of the game on websites, and determine the whereabouts of players ahead of applications being processed.

Additionally, the state’s laws demand that poker rooms provide certain information on websites, as well as maintain good record keeping, supply facilities for the resolution of disputes, address the fees and taxes to be paid, and vitally offer notifications of what assistance can be found if a player has gambling problems.

Cantor Gaming chief executive officer and president Lee Amaitis – whose firm have made a significant impact through their innovation in mobile gaming technology – was thrilled with the commission’s decision.

He said: “This is an important day for gaming control everywhere as Nevada again opens a path to a future that will benefit jurisdictions around the globe. I feel privileged to share it with you.”

With Nevada leading the way, officials are certain that these new online gambling rules will encourage numerous technology businesses to open offices in the state, while also ensuring that existing firms increase established operations.

Mark Lipparelli, the chairman of the Nevada Gaming Control Board, is not sure which company will be awarded the first licence – probably in this coming spring – to provide online poker, although he did emphasise to the commission that those six businesses which have already met with regulators will find the process smoother because of having undertaken recent checks.

The process leading to Nevada adopting online poker and gambling laws has been unsurprisingly smooth following the signing of legislation approved by state lawmakers by Republican Governor Brian Sandoval – who is a former Nevada Gaming Commission chairman.

Let’s not forget that Las Vegas is pretty well the centre of gambling – and most notably poker – within the States, so it was almost guaranteed that Nevada would be best prepared to enter this new era with the minimum of fuss as highlighted yesterday when no significant amendments were made to the legislation and no opposition was encountered.

Gambling Problems Likely to be Addressed

Significantly, though, it appears likely that states will adopt a harder line on the provision of help for those players with gambling problems, if Nevada again leads the way.

This could well take the form of a national telephone helpline being displayed on poker websites, following a request last week by Nevada Council on Problem Gambling executive director Carol O’Hare.

However, the US Senate has not been quite so proactive in passing new laws as Nevada, with the opportunity to introduce legislation relating to online poker on a national level this year now impossible.

Unfortunately, and in spite of some hopeful statements from Texas Representative Joe Barton, of the Republican Party, following the impetus gained during House sub-committee hearings, we won’t see any developments until 2012 – if even then.

Reid might have tried to work online poker into two bills, one that relates to an extension to the federal payroll tax and another which is concerned with a spending omnibus.

These bills would have allowed online poker to provide financial boosts in other government spending areas.

But it appears that no serious efforts were made this time around, although poker will hopefully be included in either a separate bill or another inclusive one by the end of next year. Let’s keep our fingers crossed.