Just eighteen players remain in the WPT LA Poker Classic after Day 4, with Josh Neufeld leading the players towards the final table and $1,015,060 first prize. 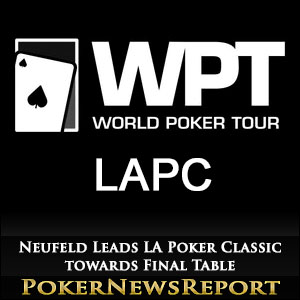 Just eighteen players remain in the WPT LA Poker Classic after Day 4, with Josh Neufeld leading the players towards the final table and $1,015,060 first prize.

Sixty-three players returned to the Commerce Casino in Southern California yesterday to play Day 4 of the WPT LA Poker Classic. Each was already assured of an $18,970 min-cash, and the goal for most of the players was to simply make it through the day, lock up $54,850 (eighteenth place prize money) and be in a good position to make an assault on a seat at the final table.

Going into Day 4, the chip lead was held by Jesse Yaginuma – who had finished third in this event last year – with Glenn Lafaye and Jennifer Tilly close behind. Behind the chip leaders Greg Merson, Matt Waxman, Chris Moorman, Jason Mercier, Mike Sexton and Jonathan Duhamel were all in pursuit; and Joe Serock was at the foot of the leaderboard with 45,000 chips (9 Big Blinds).

When players took their seats at the Commerce Casino, Level 17 had just started (blinds 2,500/5,000 – ante 500) and there was a rash of eliminations, as short-stacked players attempted to get competitive. Among the early eliminations, Jonathan Duhamel was particularly unlucky to bust – getting his last chips in with A♥ K♦ against the 10♥ 10♦ of Ludovic Assouline and finding the A♦ in the window, only for the flop to also deliver the 10♠ to give Assouline a set.

Among the other players to leave during the first couple of levels were Andy Frankenberger (2♣ 2♥ < Kazu Oshima´s A♠ J♣), David Paredes (9♣ 9♥ < Erkut Yilmaz´s K♥ J♠) and Mike Sexton – who moved all-in with A♠ K♥ and was called by Greg Merson (J♥ J♦). The J♣ in the window gave Merson a set and, despite pairing his King on the River, Mike Sexton was bust in fifty-first place.

In every live poker tournament there are always incredible hands played out but, in the WPT LA Poker Classic, they all seemed to come in a closely-grouped series. Joe Serock (10♦ 10♠) doubled up against Josh Rotenberg (Q♣ Q♦) when the flop of Q♣ 10♥ 10♣ gave Rotenberg a set, but Serock Quads; and Jason Mercier was bust in forty-third place when his Aces were cracked by Kumar Parminder (Q♠ J♦) who turned a Queen-high straight.

Josh Neufeld took over at the top of the leaderboard in a three-way hand which saw the demise of Jesse Yaginuma and in which Kumar Parminder was crippled. The relevant action occurred after the flop of J♠ 5♥ 4♠, when Parminder bet 125,000 chips, Neufeld called and Yaginuma moved all-in for 437,000 chips. Parminder tried to isolate Yaginuma by shoving his last 519,000 chips into the middle, but Neufeld paid with the last of his chips to be involved in the hand, and the cards were on their backs:

The Turn of K♥ gave Kumar Parminder additional outs, but the 5♦ was dealt on the River to give Josh Neufeld Quad Fives and triple him up into the chip lead.

Challengers Queue Up Behind

Behind Josh Neufeld only six other players have above average chip stacks (average is 890,000 chips). Glen Lafaye remains in second place after seeing off Eric Buckman A♦ Q♣ > Q♥ J♣, and Chris Moorman knocked out Jennifer Tilly with a flopped Eight-high straight > A♠ 10♦ on his way to finishing the night in third place. Joe Serock´s amazing comeback continued throughout the five levels of play; and it was he who closed the day´s proceedings when eliminating Ravi Raghavan in nineteenth place A♥ K♦ > K♣ Q♦ to enter the leaderboard in fourth place.

Behind the leading contenders, singer-actor Patrick Bruel has the chance to record his first live poker victory since his WSOP bracelet triumph in 1998 after hitting trip Aces to cripple Oliver Price  A♣ K♦ > K♣ K♥; while Kazu Oshima and Ludovic Assouline both knocked out players against the odds to remain in contention – Oshima (A♥ K♥) busting Jeremy Kottler (A♦ 10♠) after Kottler had paired his Ten on the flop, but the Q♦ on the River enabled Oshima to complete an Ace-high straight, while Assouline flopped a Set of Sevens to eliminate Bastian Fletcher 7♣ 7♠ > 9♣ 9♠.

Looking Ahead to Day 5 of the WPT LA Poker Classic