Neteller, under parent company Optimal Payments, has signed a deal with Bally Technologies to provide payment processing services in the U.S. market. 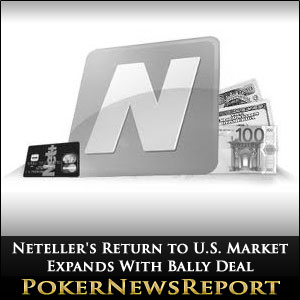 Neteller, under parent company Optimal Payments, has signed a deal with Bally Technologies to provide payment processing services in the U.S. market.

Neteller had been the most popular e-wallet option of U.S. online poker players during the early and mid-2000’s. But six years ago, U.S. prosecutors clamped down on the company with a $136 million fine. Neteller has since limited its financial dealings to the European and Asian regions.

The U.S. online gambling market has opened up once again on the state level with Nevada, New Jersey and Delaware being the first three states to regulate the industry. Neteller will make its triumphant return in the Silver State, having signed a deal with Caesars Interactive Entertainment just three months ago. Caesars will soon launch WSOP.com in Nevada. Neteller’s new agreement with Bally Technologies will expand the company’s presence in the U.S.

Bally, as many will recall, made history as the first company to receive license approval from Nevada gaming regulators to operate an online poker site. The company teamed with American Casino & Entertainment Properties (ACEP) in launching a free-play site four months ago. A transition to real money online poker in Nevada will likely commence later this year.

Neteller (Optimal Payments) will allow online poker players to deposit funds using credit cards, debit cards and electronic check processing through its NETBANX system. Ever since the UIGEA was enacted in 2006, U.S. players have had difficulties in making such deposits as banks and credit card companies were leary of accepting the transactions.

In related developments on the Nevada online poker scene, Ultimate Poker has also expanded its payment processing options to include Visa. An email was recently sent to UP customers advising that Visa debit and credit cards will now be accepted for financial transactions.

Upon its historic April 30 launch, the country’s first regulated online poker site permitted deposits via bank wire, check (either electronic or by mail), or by visiting the cashier’s cage at any Station Casino. Recently, Mastercard was added to the mix. Now, Visa will also be accepted to make life easier for Nevada residents and tourists.

The New Era of Online Gambling in the U.S.

A new era in the U.S. online poker and gambling market is emerging. While many may liken the return of Neteller and credit card deposits to the “glory days” of online poker roughly a decade ago when the industry exploded, the new era promises to be even more exciting. In the new regulated market, safeguards have and will be established that will prevent a fiasco such as that of Full Tilt where player funds were in jeopardy.

U.S. players who are still waiting for funds from Full Tilt or Absolute Poker won’t have the same concerns. Also, there will be assistance for the small percentage of players who may develop addictive gambling habits. Such safeguards were never a priority in an unregulated market.