Six years after being forced to exit the U.S. market following passage of the UIGEA, the favorite e-wallet of U.S. poker players looks to make its return. 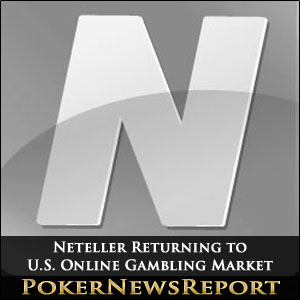 Six years after being forced to exit the U.S. market following passage of the UIGEA, the favorite e-wallet of U.S. poker players looks to make its return.

Neteller was by far the most popular payment processing choice of Americans to transfer money from bank accounts to [geolink href=”https://www.pokernewsreport.com/online-poker-rooms”]online poker rooms[/geolink] during online poker’s heyday during the early 2000’s. It was quick and easy and every poker site accepted Neteller transactions. Player-to-player transfers were also permissible.

But in 2007, U.S. prosecutors put the kibosh on Neteller’s dealings with U.S. poker players. The feds arrested the company founders, extracting a $136 million penalty and forcing the company to restrict its transactions to the Asian and European markets.

With online gambling set to commence on the state level in the U.S., Optimal Payments, the parent company of Neteller, has signed a deal with Caesars Interactive Entertainment to once again service American customers, the Financial Times reported. The company is also currently in discussions with other casino operators.

Although legalized online poker and gambling in the U.S. is likely to begin this year, Optimal Payments’ president and CEO Joel Leonoff believes 2014 is when the market will really boom. Leonoff expects 10 states to be up and running with gaming sites next year. He is also not ruling out federal legislation, which he believes would be online gambling’s “holy grail.”

Neteller was forced to look outside of the gaming industry for revenue since 2007 and now reports that 40% of its business comes from the non-gaming sector. But the company is excited to be re-entering the U.S. online gambling market, where it enjoyed substantial profits prior to enactment of the UIGEA.

Leonoff, the COO of PartyGaming before its merger with Bwin, doesn’t think that the prosecution of Neteller six years ago will affect the company’s re-entry into the U.S. He believes that the Neteller name continues to have a well-regarded reputation among American online poker players.