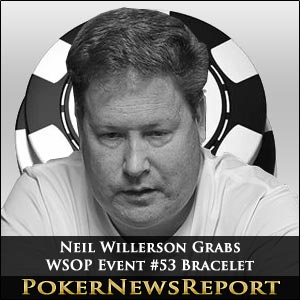 The 36-year-old from San Antonio – who was the Texas State men’s singles tennis champ back in 1994 – returned for an unscheduled fourth day to complete his heads-up clash against Russian Vladimir Mefodichev after tournament officials enforced the hard stop rule following 10 levels of play on Day 3.

Willerson started Day 4 on 8,920,000 chips while Moscow’s Mefodichev held 5,335,000 in the Amazon Room of the Rio All-Suite Hotel & Casino in Las Vegas, and it was the former who collected the gold bracelet from the biggest open field – 3,166 starters – after about an hour and 45 minutes of play.

It was during level 33 – with the blinds at 100,000/200,000 and a 30,000 ante – that Willerson finally secured his first piece of WSOP jewellery after he and Mefodichev traded chips for nearly two levels.

Short stack Mefodichev managed to double-up once after his J♣ 9♦ out-flopped the A♥ 9♥ of Willerson when it came down J♠ 2♣ 2♥. This gave the Russian four million chips while Willerson was cut back down to 10.2 million. However, apart from picking up a few small pots, Mefodichev soon found himself all-in again – and this time he would not be so fortunate.

Willerson responded by shoving all-in with J♠ 6♠ and Mefodichev called for his event life while holding K♠ 5♠. The latter was ahead as both players obviously looked to complete a flush draw, although that would be no good to Willerson now as Mefodichev had the king-high.

However, the 6♣ arrived on the turn to give Willerson a pair and the lead, leaving Mefodichev needing a spade or king on the river to secure a double-up. Unfortunately, for the Russian, the 10♥ came down, ensuring that Willerson was champion.

Mefodichev had been aiming to become the first Russian to win a bracelet at this year’s WSOP, but had to settle for a runners-up spot and $456,217.