Neil Raine dominated the final table of Leg 3 of the Grosvenor UK Poker Tour in Stockton at the weekend to collect the GukPT trophy and £17,690 first prize. 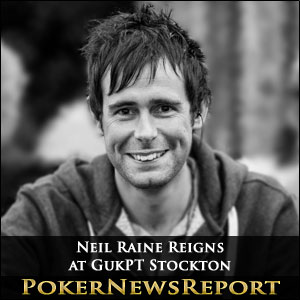 Neil Raine dominated the final table of Leg 3 of the Grosvenor UK Poker Tour in Stockton at the weekend to collect the GukPT trophy and £17,690 first prize.

Most players looking at the choice of options for major live poker tournaments this past weekend (Monte Carlo, Dublin, London) might not have selected Stockton as their first choice; but 176 players qualified or ponied up the £550 buy-in for the £50,000 guaranteed GukPT Stockton Main Event which concluded on Sunday night.

Neil Raine had gone into the final table of the tournament with the chip lead after taking out the dangerous Stuart Instone (AA > JJ) towards the close of Day 2; but he faced some experienced GukPT competition in the shape of Tom Hall (fifth in the recent GukPT Didsbury) and Dave Maudlin (who finished seventh in the 2012 GukPT Grand Final).

No Luck for Maudlin as Sung Sings

Dave Maudlin had only two Big Blinds remaining after being crippled late on Day 2 in an AA (John Bousfield) > AK (Kieran Appleby) > AQ (Dave Maudlin) hand which saw the elimination of Kieran Appleby and the ascension up the chip counts of John Bousfield. Unsurprisingly Maudlin was the first player to leave the table after running 76s into the Queens of Chris Howden.

The elimination of Dave Maudlin may have been sweet for Chris Howden, but it was short; as Howden was bust in seventh place – one of a hat-trick of knock-outs by Stephen Sung, who also sent Chris Green-Smith to the rail in eighth (AK > A9) and flopped a set of Jacks to see off John Bousfield (AK) in sixth.

Raine Extends his Lead but Collins becomes the Threat

Neil Raine extended his lead at the top of the chip counts when eliminating WSOP bracelet winner Lawrence Gosney in fifth – Gosney getting all his chips into the middle with Q10 on a flop of 8-9-10, but trailing Neil Raine´s 67 flopped straight. Dave Collins eliminated Tom Hall in fourth place (JJ > AK) when Hall failed to connect to the board and there then started a tense 2½ hour session of three-handed play between Raine, Collins and Sung which seemed as if it would go on all night.

In the hand that ended the three-way deadlock, Stephen Sung limp-shoved his pocket Kings into the AQ of Dave Collins. The Kings held through the flop, but an Ace on the Turn ended Sung´s participation in the GukPT Stockton Main Event in third place and gave Dave Collins a narrow chip advantage going into the heads-up against Neil Raine.

Neil Raine Does It with Cowboys

With blinds of 8,000/16,000 and both players having just over a million chips, the balance of power in the heads-up swung back and forth for more than an hour. In the final hand, Tom Collins (7♦ 5♦) had checked out the strength of Neil Taine´s cards on a flop of 7♣ K♦ 10♣ and moved all-in after the 2♠ was dealt on the turn.

Raine (K♣ 9♣) called, and was well ahead with the top pair of Kings and outs to a Flush draw – a further King on the river giving him Trips and the title of GukPT Stockton Champion.