There was trouble at the EPT Barcelona yesterday as Daniel Negreanu was eliminated from the High Rollers tournament after ranting about the First Card rule. 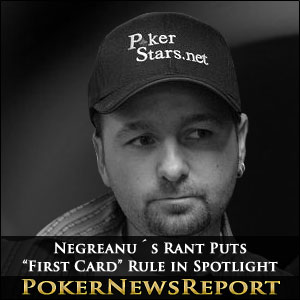 There was trouble at the EPT Barcelona yesterday as Daniel Negreanu was eliminated from the High Rollers tournament after ranting about the First Card rule.

Daniel Negreanu has become the most recognisable name in live and online poker for a number of commendable reasons, but he is occasionally prone to rants which lose him respect – whether justified or not – and yesterday he regressed to another tantrum during the $10,000 buy-in EPT Barcelona High Rollers Event.

“I was Standing Right There”

The problem occurred at the beginning of Level 3 when Negreanu – who had been talking to Philipp Gruissem on a nearby table – placed his small blind on the table and then turned away to continue his conversation with Gruissem across the floor.

The dealer – noting that Negreanu was not in his seat at the time the first card of the hand was dealt – declared Negreanu´s hand dead and mucked his cards before continuing with the hand. When Negreanu saw what had happened, he hit the roof.

I was standing right there declared Negreanu and immediately called the floor staff in to vent his feelings.

As players on other tables stopped to find out what all the fuss was about, it was decided by the Tournament Director that the dealer had acted in accordance with the European Poker Tour rules and Negreanu´s hand should be declared dead.

Negreanu threw a tantrum at this point and, as soon as the cards for the next hand were dealt, swore F*** it, I´m all in blind and threw his remaining stack of chips into the middle of the table.

These f***ing rules are so stupid they make me want to shoot myself in the face!

The action folded around to Timothy Adams who called the bet with 7♦ 7♠ and, with dozens of players still watching from the relative safety of their own tables, the dealer dealt out 2♥ 2♦ 2♣ / 5♠ / J♦ and Negreanu (A♥ 3♥) was bust from the High Rollers Event.

Negreanu immediately continued his rant to the biggest audience he has – his 264,000 Twitter followers:-

Negreanu then posted a more subdued version of events on his Full Contact Poker website in which he continued to criticize the First Card rule and the way in which it had been applied, but added

my reaction is silly and I realize this

What is the First Card Rule?

The first card rule was adopted for most major poker tournaments by PokerStars (who have had it in effect for over two years on the European Poker Tour), the WPT and the WSOP following a meeting of the Tournament Director´s Association in the summer (the Association´s goal is to adopt a universal set of rules for live poker tournaments). The rule states:-

A player must be at his seat when the first card is dealt on the initial deal or he will have a dead hand. A player not then at his seat is dealt in, he may not look at his cards, and the hand is immediately killed after the initial deal. His blinds and antes are posted and if dealt the bring-in card in a stud-type game he will post the bring-in*. A player must be at his seat to call time. “At your seat” means within reach of your chair. This rule is not intended to condone players being out of their seats while involved in a hand. [*Note: In stud, house rules may require additional card(s) be dealt to the killed hand in certain situations.]

Why was it Introduced?

The first card rule was not so much introduced, as changed from the existing rule which stated that a hand would be declared dead if the player was not at their seat when the dealer had dealt the final card to the player in the button seat (except for PokerStars live tournaments where the First Card rule was already in place).

The primary reason for the “change” of the rule was to prevent late-positioned players walking around a table and attempting to look at other players cards – and, although it does not happen very often, the change of the rule eliminates the possibility of this happening at all. Back in July, PokerStars´ Neil Johnson wrote a compelling article on the pros and cons of the First Card rule which can be found on the PokerStars blog.

Too Likeable for his Own Good

The first card rule card is disliked by Daniel Negreanu and some other players (Jason Mercier and Paul Volpe also sympathise with Negreanu´s opinion) because he is a social guy who likes to get up and wander around during a tournament.

Unless he is ever the victim of a peek over the shoulder, Daniel Negreanu is unlikely to change his position on the first card rule – but, if he does, you can be sure we will hear about it!